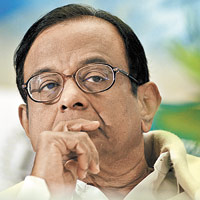 "We are targeting 12 lakh non-filers and stop-filers of service tax," he told reporters after inaugurating the 28th conference of chief commissioners and director generals of Central Board of Excise and Customs (CBEC).

The minister said he had impressed upon the tax officials "that revenue mobilisation is the most important task of the department and they should achieve this (tax collection) target".

Service tax accounts for one-third of the total indirect tax collection in the country and the government expects to raise Rs 1.8 lakh crore through the levy this fiscal.

Chidambaram also exuded confidence that with the economy expected to grow by about 6 per cent, the Revenue Department will be able to achieve the target of 19 per cent increase in indirect tax collection in the current fiscal over the realisation in 2012-13.

"In 2012-13, we achieved 21 per cent increase over the previous year's collection. With economy expected to grow certainly higher than 5 per cent...I think with growth close to six per cent, we should be able to collect 19 per cent more than last year," the Minister added.

The finance ministry has fixed the target of indirect tax collection, comprising customs, excise and service tax, at Rs 5.65 lakh crore for 2013-14.

The ministry had collected Rs 4.73 lakh crore as indirect taxes during 2012-13, according to the latest data put on Department of Revenue's website.

Assessees, Chidambaram said, were yet to get used to paying service tax which is a new levy but "the fastest growing tax".

Starting with the 4 per cent of the total indirect taxes collected, he added, "service tax now occupies one-third space of the total tax collected.

They (assessees) are used to the idea of excise duty but they don't realise that that service tax is only other side of excise duty.

Moreover, he added, the assessees are also taking time to adjust to the format of negative list of service tax which was introduced last year.

"Given all these problem it is not surprising that non- filers and stop-filers have mounted in service tax. The number exceed 12 lakh or so. We are targeting them," he added.

Referring to the one-time voluntary compliance scheme for service tax, Chidambaram said that the Department was to advertise it in a big was to encourage assessees to take advantage of the scheme.

The scheme, he added, "gives an opportunity to assessees to come clean and pay arrears of service tax without interest and without penalty and then pay (taxes) regularly thereafter".

Referring to excise duty, Chidambaram said it has the smallest base with 1.2 lakh assessees.

The Minister said he has impressed upon chief commissioners to keep in close touch with 100 top assessees and treat them as clients as they account for over 80 per cent of the collection.

The Customs Department, he added, should rely more on technology instead of physical verification to clear import and export cargo.