Business With A Human Touch 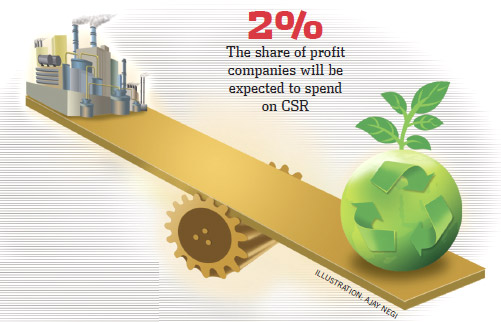 The Companies Bill 2011 had proposed a legislative framework for companies to earmark 2 per cent of their net profits for CSR activities. The proposal, which is being considered by a parliamentary panel at the moment, is to make reporting of CSR activities mandatory. The government will now expand the scope of CSR by making it part of the ABRR framework.

Sustainability reporting is already a voluntary practice among a number of Indian and foreign corporates, though very few account for it under a separate head. That may change now. Public sector majors like ONGC and Gail and corporate groups like Tatas and Reliance bring out sustainability reports on a regular basis. The GRI itself has 17 Indian entities among its organisational stakeholders, including RIL and CII.

Corporate affairs minister Veerappa Moily says the framework will be finalised and implemented in consultation with stock exchange regulator Sebi and other stakeholders soon.

The draft sustainability guideline reporting framework was prepared by a committee headed by Bharat Wakhlu two months ago. The electronic format suggested by Wakhlu seeks disclosures at multiple levels of the firm's operations. This includes a section that seeks information on the nine principles enshrined in the National Voluntary Guidelines on the "Social, Environmental and Economic Responsibilities of the Business" brought out by the ministry last year.

Prime Minister Manmohan Singh is expected to declare India's commitment towards sustainable development at the UN Conference on Sustainable Development in Rio next week.