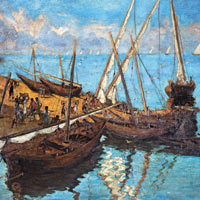 08 November, 2014
Print this article Font size -16+
When was the last time you saw someone with a canvas on an easel and brush in hand at a beach or a hill station, capturing every wave, every last detail of the terrain, for posterity? Many say landscape art is a genre that is fast dying, if not already dead; blame the Canons, Nikons and others in the camera trade.
But at the Delhi Art Gallery (DAG), on the opening day of a show called ‘The Changing Horizon’, the mood was far from funereal. Quite the contrary, it was celebratory. An overview of 300 years of Indian landscape art, with nearly 400 works from over 100 artists on display. There were no blues, except within the frames; no heavy sighs or pregnant pauses. Aficionados had lots to talk about, even though the art wasn’t in the least bit controversial.
Curator Kishore Singh was a happy man. “There are takers — discreet, but serious,” he says. The Jamini Roy behind him, a gouache on board, had already found a new home.

As children, all of us started out with painting hills, trees, rivers and a yellow blotch for the sun. Just that none of us graduated to commanding a price tag of Rs 1.5 crore — that of ‘Udaipur’, which Husain painted in 1962.

Roy’s work in gamboge strokes is from his Impressionist phase, after which he was lured by the Kalighat pat style and moved on to other genres. “So did M.F. Husain, F.N. Souza and G.R. Santosh; they’ve done a few landscapes before finding their forte,” says Singh, also head of publications and exhibitions at DAG, pointing out rare works of the masters.
The first landscapes in India date back to the 18th century, when European traveller-artists such as the Daniell Brothers, William Hodges, Edward Cheney and Robert Grindlay — all whose works are on display — produced ‘documentary paintings’ so as to introduce a colourful land to their countrymen. Interest in landscapes was waning in Europe, which was then experimenting with Impressionism, but the travellers’ works found a ready market among the elite and the East India Company.
Indian artists were happy to get inspiration from European realism, but sometimes they emded up making glaring mistakes. “They were learning,” says Singh, standing in front of an early Bengal oil in which the calm sky and the river are categorically European, Radha and her entourage purely Indian, their heights defying perspective and the steps on the Yamuna bank ending abruptly.
More refined versions of academic realism can be seen in the works of Abanindranath Tagore, Nandalal Bose, Prosanto Roy and Indra Dugar. Tagore found a mentor in Italian artist Olinto Ghilardi, but he, like many others, was lured by the Japanese wash style where transparent pigments give luminosity to the landscapes. At the show, there are two scrolls over eight feet long, one each by
Kripal Singh Shekhawat and Bishnupada Roychowdhury, which feature tiny figures and objects painted painstakingly on paper, reflecting the strong influence of Japanese art.
In the 1940s, the Bombay Modernists, led by Husain and Souza, discarded the Bengal school for its wispy sentimentalism. Thirty years later, artists grew out of expressionism to play with abstract forms. Contemporary masters such as Ram Kumar and Manu Parekh interpret landscapes as an inspiration and eliminate the formal elements of nature. Benaras was a muse for both, but their works are not picturesque postcards of shrines and ghats, but an interpretation of ideas —  evoking presence through absence.
“This is like a history lesson,” Richa Goel, a graduate from the College of Arts, Delhi, tells her friend. Indeed it is, with canvases thematically arranged in separate galleries. From etchings that project oriental fantasies of colonialism to Santiniketan washes with elements of culture to morbid cityscapes to abstract activism, landscapes have lived through many intense experiences.
So has Kanwal Krishna who, in 1948, went to the Indo-Pak battlefield to paint en plein air (painting outdoors). “He spent about six months with the army, painted the Valley and the lives of jawans,” remembers his daughter Mridula Vichitra. “He was the first war artist of India,” she claims. Krishna was also one of the first to attend and paint Dalai Lama’s coronation. His watercolour of Tibet is on display at the show.
Every landscape has a story. In the halls of the gallery, when the crowds recede, listen to them. They could change your horizons.