Brisk Polling In Biggest Round Of LS Polls 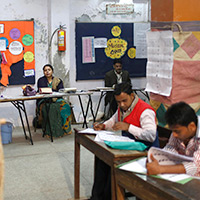 08 November, 2014
Print this article Font size -16+
Moderate to brisk voting was on Thursday (17 April) recorded in the first five hours of polling across 12 states covering 121 constituencies in the fifth phase ? the biggest of the nine-phased Lok Sabha polls amidst Maoist violence in Jharkhand where rebels injured a CRPF jawan, blew up a railway track and exploded ten bombs.

Viewed as a high stakes day by both BJP and its allies, which hold 46 seats and Congress and its partners having 43 seats, today's polling may decide which party will lead the race to form the next government.

In Uttar Pradesh, over 27.44 per cent voters exercised their franchise till 11 AM. Polling is going on on 11 seats in the second phase to decide fate of 150 candidates, including Maneka Gandhi, Santosh Gangwar, Saleem Sherwani and Begum Noor Bano.

In Karnataka, voting began on a moderate to brisk note in the single-phase elections for all the 28 Lok Sabha seats.

Former Chief Minister B S Yeddyurappa (Shimoga) and Moily (Chikkaballapur) were among the early voters, as voting began with about 4.62 crore voters eligible to exercise their franchise to decide the fate of 435 candidates.

BJP has lodged a complaint with electoral officials against Chief Minister Siddaramaiah alleging that he had violated the model code of conduct.

Barring reports of Naxal violence in some places in Jharkhand, polling has been peaceful, poll officials said.

An estimated 12.74 per cent voters exercised their franchise till 9 AM in the second phase of polling for six Lok Sabha constituencies in Jharkhand.

Passenger train services were hit in Bokaro district where Maoists blew up a stretch of railway track.

A report from Giridih in Jharkhand said Maoists exploded ten bombs at separate places in Giridih Lok Sabha constituency where polling is on.

"Seven bombs were exploded serially near Bistuur under Pirtand police station around 8.30 AM. All the security and polling personnel are safe," Superintendent of Police Kranti Kumar.

Three Naxal-hit constituencies of Chhattisgarh saw about 30 per cent of electorate cast their votes in the first four hours of polling.

In Odisha, around 15 per cent voters exercised their franchise during first three hours for the simultaneous second and last phase election to 11 Lok Sabha and 77 Assembly constituencies.

Among the early voters were Assam Governor J B Patnaik and Chief Minister Naveen Patnaik as brisk polling was witnessed in several areas.

While polling was in progress in a peaceful manner in the constituencies spread over 13 districts in coastal and northern Odisha, reports of delay in voting were received from some places due to problems in EVMs.

Repolling is also being held in 22 booths spread over eight Assembly segments in the state where polling was stalled due to various reasons, including snatching of EVMs, during the first phase of voting on April 10.

In Bihar, about 14 per cent voting was recorded today in first three hours of polling on seven Parliamentary seats.

Though no untoward incident has been reported so far, voting in four booths in Munger Lok Sabha seat have been adjourned due to suspicion of presence of landmine, Election Commission sources said.

There have been reports of irregularities in EVM machines in Patna, Jehanabad, Munger and other places which were addressed and voting has resumed, the EC sources said.

RJD President Lalu Prasad along with wife Rabri Devi cast their vote at a polling booth at Veterinary college.

Their daughter Misa Bharti, who is in the fray from Patliputra seat, also exercised her franchise at Veterinary college booth.