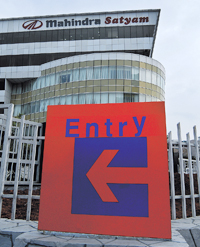 Are you auditors?” The security staff greets us with that question at the Satyam Computer Services’ Hitech City headquarters in Hyderabad. It drives home forcibly how the organisation is still battling the fallout of its former chairman B. Ramalinga Raju’s explosive confession of a Rs 7,136-crore financial fraud this time last year.