Bringing A Bit of French Heritage To Indian Kitchens

"Flame" coloured Dutch-ovens have long occupied a prized space in the kitchens of the fabulously wealthy and in high-end cookhouses, courtesy Le Creuset. With humble beginnings in Fresnoy-le-Grand in northern France, the brand's discernable cast iron kitchenware has become legendary and its fame shows no sign of slowing down. This year, the French heritage cookware brand celebrates its 90th anniversary. BW Businessworld's Simar Singh caught up with Le Creuset's India and SAARC head Ankur Damani to talk about the iconic brand and the space it is making in the cabinets of Indian customers. 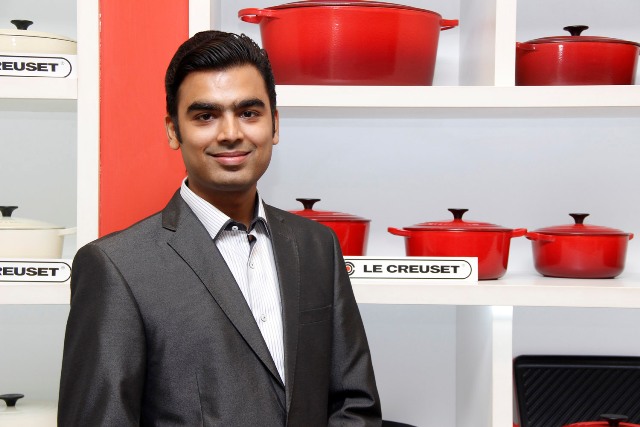 17 November, 2015
Print this article Font size -16+
When did you enter the Indian market and how has the response been?
Le Creuset entered India in 2007, primarily operating in the Horeca (food and beverage service industry) and wholesale segments. We opened our first company-owned retail store in February 2014, after being amongst the first four brands to secure the single brand FDI license for retailing in India.
The response has been phenomenal in the Horeca segment, with most premium hotel chains using Le Creuset products. The response to the retail stores has been great, and it is very positive to see many consumers aware of the brand and using our products for years, having bought from other countries in the past.
Are you able to recreate the nostalgia attached to the brand in India?
Extravagance and luxury in India are growing exponentially and moving from fashion to the living room and now to the kitchen. Add to that certainty that Indians are turning out to be more wellbeing cognizant and willing to spend on the right item, which guarantees esteem for cash. This makes Le Creuset extremely pertinent in the Indian setting - the item offering is one of a kind and the brand offers a lifetime guarantee, which makes it a one-time investment. The quickest offering portion at Le Creuset is the solid cast iron cookware inferable from its engaging quality and stove-to-table idea. The Stoneware, Steel Ply and Toughened Non-Stick extent are additionally finding numerous takers in India.
What's next for Le Creuset in India?
Le Creuset is expanding rapidly in India and focus is retail stores. We have already opened three stores in key malls in Delhi-NCR and have got a very positive response, with the fourth store is scheduled to open shortly. Le Creuset plans to open more stores in key malls and high streets across metropolitan cities like Mumbai, Bangalore, Chennai, Hyderabad, Kolkata and Pune in the next two to three years.
How is Le Creuset celebrating its 90th anniversary?
In celebration of the joy our cookware has brought to people around the world for the last nine decades, we are releasing a commemorative reproduction of the original cocotte, as well as the smaller stoneware version, in the original Vintage Flame hue. This piece is sure to be cherished in kitchens around the world, just as Le Creuset cookware has been for the last ninety years. In addition, we are doing on ground activity with leading chefs across the world, along with a microsite and several social media initiatives.
Tags assigned to this article:
Le Creuset Ankur Damani luxury france