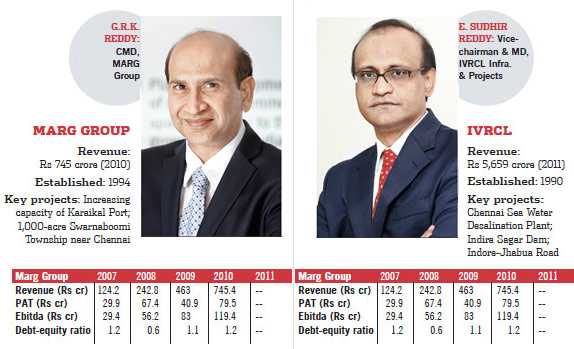 In fact, that is something common to most of these companies. They are all highly leveraged. "Over the past three years, these upcoming groups have bid for plenty of projects and have over-leveraged themselves," says Sneha Rungta, senior analyst at Sharekhan Securities in Mumbai. She says that these companies have to balance their business portfolio between EPC (engineering, procurement and construction) contracts — which bring in immediate cash —and BOT projects which bring in steady revenue after completion of the project in three years. "A debt-to-equity ratio of 4:1 is healthy for an infrastructure firm, they just need to manage their working capital cycle and find ways to finance their new projects," says Sankara Ayyathurai, founder, SS Halcyon Investment Advisory.

Project delays could pull firms down. Projects are delayed when the legal clearances are not obtained on time. Deepak Purswani, senior analyst at ICICI Securities, says that companies need to both control materials and develop projects. The margins in this business can be as low as 5 per cent, and so one has to either diversify to hedge against the losses or acquire enough knowledge to own and execute projects.

Hyderabad's Ramky Infrastructure is heeding Purswani's advice. "I run my business to get cash first and then spread my risks," says Ayodhya Rami Reddy, chairman of the $1.5-billion Ramky Group of companies. "A company needs more assets that yield money in the long-run than be dependent on businesses that are subject to working capital delays," says Reddy.

Ramky has an order book of Rs 10,000 crore and has expanded to Africa and the Middle East. Apart from building large residential projects such as the Rs 400-crore Ramky Towers in Hyderabad, it is currently building five road projects for Rs 400 crore.

Rami Reddy, however has placed his bet on waste management and has set up a separate company called Ramky Enviro Engineers. But it is facing competition from politicians and local contractors who do not want the business of waste management to be organised by a corporate. "That's why my business is also focused on global projects for revenues and I want 50 per cent of these revenues to come from abroad in a few years," he says. He is working on a Rs 380-crore order to build a 1,000 acre special economic zone in Libreville, the capital of western African country Gabon.

Although Rami Reddy has tasted success, he has his own share of troubles. Recently, the CBI raided the premises of Ramky Infrastructure regarding projects that were offered to the firm by the Andhra government between 2004 and 2009, giving substance to whispers of a nexus between infrastructure firms and politicians.

Business Methodology
The business models of these companies are similar: create a special purpose vehicle (SPV) and execute projects on a BOT or BOOT (build, own, operate and transfer) basis individually or in partnership with the government or another firm. If 51 per cent of the SPV is owned by the parent company, then the SPV's loans get reflected in the parent's balance sheet. These SPVs, however, become operationally profitable only from the third year of operation. Ramky has 11 SPVs, while Gayatri Projects and Madhucon have 10 each.

The second business model is EPC contracts: the companies work on annuity basis, which delivers cash every six months. "These firms will eventually want to go for the BOOT route. For that they need good project management processes," says Neeraj Bansal, director of advisory business at KPMG. He adds that these are promoter-run companies that need a strong second line of management to survive in the long run.

And the long-run is what these firms are aiming at. "We don't share the same DNA (as GMR and GVK), but we have the skills to become large players," says Rami Reddy. Agrees Sandeep Reddy: "We are already national players; we just have tonnes of work to focus on before we build a brand."