Bribery In Pvt Sector May Be Made A Criminal Offence 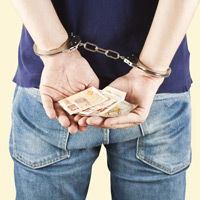 08 November, 2014
Print this article Font size -16+
The Government is considering a proposal to make bribery in private sector a criminal offence through amendments in the Indian Penal Code.

Since, Criminal Law and Criminal procedure fall in the concurrent list of the Seventh Schedule to the Constitution, the Ministry informed that taking a view on the proposal will be subject to receipt of the comments from all the State Governments and Union territories administrations, he said.

"No decision has been taken by the Government to amend existing anti-graft laws to cover private sector and introduce ethics code to check bribing of public officials," the Minister said.

Responding to another question in the Lok Sabha, Narayanasamy said there is no proposal with the Government to make corruption-free public service a fundamental right.

However, the Government has introduced the Right of Citizens for Time Bound Delivery of Goods and Services and Redressal of their Grievances Bill, 2011 in the Lok Sabha which lays down an obligation upon every public authority to publish citizens charter stating therein the time within which specified goods shall be supplied and services be rendered, he said.