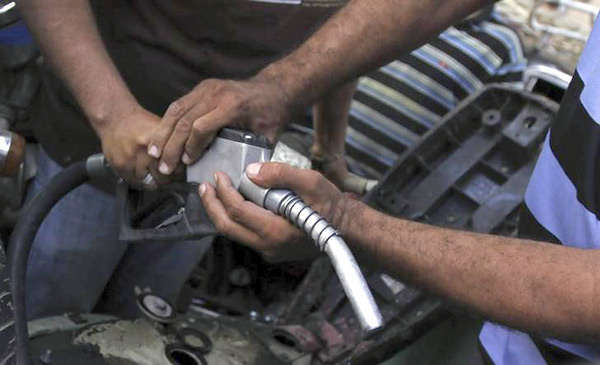 The oil benchmark has fallen more than 12 per cent from this year's peak of $115.71 reached in June due to the turmoil in Iraq. While the conflict there continues, there has been no significant disruption to oil supply from the No. 2 OPEC producer, giving space for a sustained retreat in prices.

Lukoil, Russia's second biggest oil producer, said on Tuesday (19 August) it had shipped 1 million barrels of oil produced from southern Iraq's giant West Qurna-2 oilfield, its first shipment from the field, despite a surge of violence in the country.In Libya, a spokesman for National Oil Corp said the country's total oil production had risen to 562,000 barrels per day (bpd) from 535,000 bpd at the weekend.

"That's very much what the market is focusing on, the abundance of supply and the decreasing risk in terms of the geopolitical tensions," said Ben Le Brun, market analyst at OptionsXpress in Sydney.

"It appears the traders are thinking that there's still risk to the downside when it comes to oil prices."

Delegates from three members of the Organisation of the Petroleum Exporting Countries (OPEC) said the group was not worried about a slide in oil prices towards $100 a barrel.

Current levels were seen as acceptable while higher seasonal demand in the coming weeks was expected to support the market, the delegates said.

But September US crude edged higher after falling sharply on Tuesday ahead of the contract's expiry on Wednesday.

Brent's premium over the U.S. contract, or West Texas Intermediate, widened to $8.82 on Friday, the biggest since June, following a spike in Brent that proved to be short-lived. The gap returned to similar levels on Tuesday after WTI's slide.

While geopolitical worries have eased, they are far from getting resolved and Le Brun at OptionsXpress said any escalation of tensions in the Middle East "will definitely see risk premiums reapplied to oil prices fairly quickly".

Islamic State insurgents posted a video on Tuesday purportedly showing the beheading of U.S. journalist James Foley and images of another US journalist whose life they said depended on how the United States acts in Iraq.

The posting of the video followed nearly two weeks of US air strikes that have pounded militant positions and halted the advance of Islamic State.

"But at this stage, the shorters have a lot more interest in this market than the traders on the long side," said Le Brun.

Investors are also eyeing the annual meeting of central bankers in Jackson Hole, Wyoming, that kicks off on Thursday. Federal Reserve chief Janet Yellen speaks on Friday in an address that could give clues on the timing of a U.S. interest rate increase.

Keeping US rates lower for longer in aid of the economy should spur appetite for risky assets including oil.