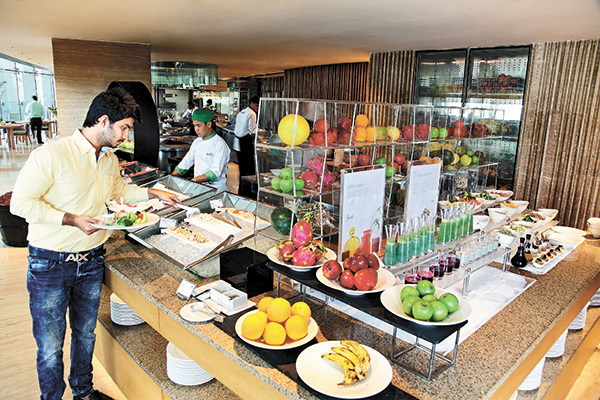 08 November, 2014
Print this article Font size -16+
At social, my ad-opted workspace in Hauz Khas Village, Delhi, I find myself strangely at home-and-at-work simultaneously on most mornings. Between facing the laptop, scanning familiar faces or the calmness of the greens outside, comforted by familiar rituals of sipping on ice cold water alternating with gulps of caffeine, cheered by the playlist, there are peckish moments when I give in and order a tray of the Bhai Istyle breakfast.
I don’t know if you consider a bowl of spicy keema, topped with a fried egg, and some addictive buttery bun-maska healthy, but being the firmly Delhi-person I am, I find this paean to Bombay quite hard to resist.
A trimmer option would be Harmeet’s chic breakfast — fresh fruit, muesli, yoghurt and granola. But what the heck, sometimes inspiration, especially writer-ly, is hard to come by sans some serious pampering of the palate.
In any case, ever since I’ve discovered the collaborative workspace where freelancers of all hues — filmmakers, fashionmakers, writers, aspiring drama queens and kings, etc. — work in silent and not-so-silent harmony, breakfast has become an important part of my existence. I troop in early, plug in the comp, order pancakes and eggs... and, of course, on some decadent mornings, keema and cutting chai.
If Espresso-at-the-bar, croissants dipped in cafe au lait, and pancakes and dim sum are all well-ensconced global traditions, so are bedmi aloo, idli sambhar, nihari kulche and more. But despite the strong culture of street breakfasts, the Indian restaurantscape has been woefully lacking either in substantial or inventive first meals, especially outside the hotels. Until now.
With the well-travelled middle class Indian now increasingly looking at decadent, or even just interesting, brekkers, breakfasts may well be the new brunches as far as their perceived chic quotient goes. On weekends, there are those decadent, spoil-me ones that some cafes are specially dishing out. But even on weekdays, there are enough new places that will allow you to have not just a double shot of espresso standing at the bar, quite like you’d do in Milan or Rome (Artusi, Delhi) but also spreads that are healthy and interesting; fulfilling yet not overwhelming — allowing you to conduct interviews and meetings, casually, sans fuss and formality.
The globalisation of the palate means waffles and pancakes, Eggs Benedict, organic juices, French-press coffee and more are zooming right up the popularity charts. So, which are the places you should frequent? Here’s my pick:
In Delhi, Social with its quirky breakfast trays and reasonable pricing (Rs 250-300), is quite the hipster place to be at, especially since there is an upstairs work area with free Wifi, enough plug points for laptops and phone chargers. It’s ideal for casual meetings. It helps, of course, that this is also a hugely trending space. They have outlets in Bangalore and Mumbai with the same concept, so you could pop in there too.
But what I was totally bowled over in the more luxe space—the hotel buffet breakfast space is crammed with so much indifferent stuff usually—was the spread at the Westin, Gurgaon.
The highlight is the wellness twist. An entire section is dedicated to superfoods and most mornings see waiters roam around with trays of passarounds, offering samplings of inventive health fare. From mini broccoli uttapams to various shooters with the likes of beetroot, tomatoes and spinach, fresh cheese to mini glasses of homemade muesli and yoghurt.
In Delhi, two classic, fail-safe places for breakfast have always been Eggspectations (best waffles, and pancakes around) and the American Diner at the India Habitat Centre. But with healthy breakfasts being quite the in-thing, you could also check out Super Breakfast at NYC, Radisson Blu Plaza in Delhi. On weekdays, they begin as early as 6.30 am and are stocked full with gluten-free bread, homemade granola bars, sugarfree muffins, and diabetic-friendly preserves.

If you prefer a more street feast, try Delhi’s famed nihari, the breakfast of the old city. And you don’t even need to go to Shahjahanabad for it. Instead, the Suryaa’s new 24x7 restaurant, Ssence, serves some Indian classics, alongside its health spread—juices, homemade yoghurt, multigrain bakery items et al.
In Mumbai, Bandra is, of course, quite the place. Scores of old and new places offer inventive or satiating breakfasts. While the likes of Indigo Deli have been classics, Cafe Suzette serves all manners of crepes through the day. However, the latest flavour is Cafe Zoe (Lower Parel), an all-day cafe, where you could order Eggs Benedict, waffles, French toast, etc.
In the hotel space, my favourite remains the charming Lotus Cafe at JW Marriott in Juhu. The vibe of the cafe is inimitable—peppy Bollywood strains, bhajiya and chai passarounds and then some of the best and most elaborate live counters.
But it is Bangalore that is really the breakfast capital of India. It is not merely because of the legendary MTR (or even because of Sunny’s) that you should wake up early here. Ritz, the new kid on the block, does things in style with a huge buffet. There is dim sum and congee, flavoured homemade yoghurt and breads straight from the oven. But a big draw is the juice bar, where you can pick vegetables of your choice and have them juiced up. There can’t be a more nutritious way to begin a power summit. Impress your guests further with a sattvick breakfast (anything can be cooked the vegetarian, sattvick way) that can be ordered around 48 hours prior.
Arguably the most innovative breakfast not just in the garden city but perhaps anywhere in India has to be at Monkey Bar (now two outlets each in Bangalore and Delhi). But go to the Indiranagar branch for the most extensive spread. This is a weekend only breakfast and quirky new offerings include Egg Kejriwal (grilled pav topped with scrambled eggs with chilli, tomato and coriander), the Monkey version of the French toast— Jewish bread, soaked in milk, eggs and pan-fried in a peanut butter and jelly sandwiched avatar, and such.
In Chennai, Murugan idli may be your go-to place, but if you want salubrious settings with comparable perfection, try the idlis at the Grand Chola — the softest anywhere. There are also multigrain and oats dosas besides an extensive spread. In the non-hotel category, new entrant Sandy’s that dubs itself a chocolate lab, is must visit — banana split pancakes, chocolate organic muesli, hangover curing breakfasts, frankfurters and the works.
Meanwhile, in Kolkata,  the refurbished Flury’s may evoke different reactions. But check it out on a Sunday morning and you will know what a really popular breakfast looks like!
(This story was published in BW | Businessworld Issue Dated 03-11-2014)
Tags assigned to this article:
columnists prosenjit datta web exclusives opinion 5 bjp narendra modi prosaic view