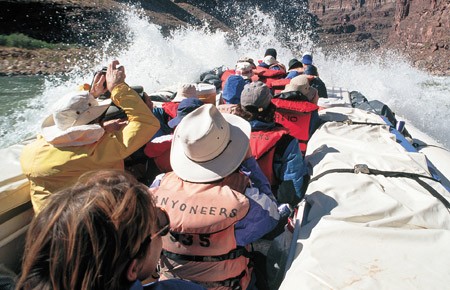 From the alluring climes of Latin America, move to Zambia in wild Africa, towards the south of the continent. The 3,540-km Zambezi river, the fourth-longest in Africa, starts in Zambia and flows through Angola, along the borders of Namibia, Botswana, Zimbabwe and Mozambique. One of its spectacular features is the 1.7-km wide Victoria Falls (along the border of Zambia and Zimbabwe), where the Zambezi drops some 100 metres into a narrow gorge. Rapids in the Upper Zambezi are very frequent (between 100 metres and 2 km), many of them being Grade 5 and Grade 6. Some of the fifth-graders are Gulliver's Travels, Open Season, Upper Moemba and Ghostrider, while the Grade 6 rapids include Commercial Suicide, Lower Moemba and Deep Throat. The stretch just south of the Victoria Falls to Batoka Gorge contains some of the most dangerous rapids in the rafting world, including the Stairway to Heaven, Devil's Toilet Bowl and Oblivion rapids.

Victoria Nile, Uganda
From Zambia, move north to Uganda. Here, you find the White Nile, which runs through Uganda, Sudan and Egypt. Known as the Victoria Nile, the river arises from Lake Victoria in Uganda and is widely considered one of the world's most thrilling white-water rafting destinations. Most trips start in Jinja by Lake Victoria. In addition to some Grade 4 and Grade 3 rapids, there are several Grade 5 ones in the Victoria Nile. Rapids such as the Big Brother and G-spot can terrify as your raft spins around the whirlpools and climbs vertically into waves. The most dangerous Grade 5 rapid is the The Bad Place. To get there, you have to carry your raft around a Grade 6 rapid — don't try rafting that one — before rejoining the river.

Yangtze, China
Finally, from Africa to Asia, to the world's most surging economy, China. The Middle Kingdom cradles the Yangtze or Cháng Jiang, the longest river in Asia and the third-longest in the world. Flowing over a 6,418-km expanse, Yangtze has seen very few rafters successfully navigating its rapids. At places, its flow is six times as fast as the Colorado river in the Grand Canyon. The most difficult stretch is the 192 km through three gorges — Xiling, Wu and Qutang. The rapids are characterised by intense hydraulics and surges of white water, dangerous ledges, huge holes, whirlpools, and 10-15 ft breaking waves.