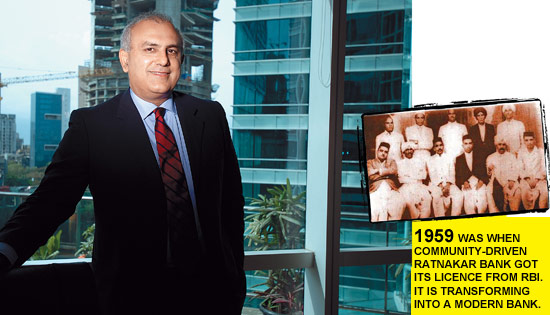 On The Road To ReinventionDespite the reinvention having started in 2010, and the economy still not having turned around, private equity firms have not been shy of putting their money behind Ratnakar's drive to become a modern bank. It has a healthy balance sheet, a good business story, and is attractively valued. But is that enough? What will ensure that Ratnakar does not falter?

As Ahuja points out, coming from a large corporate set-up to a smaller institution seems simple, but is not without its challenges. "There were, and still are, legacy issues," he admits over a cup of tea in his glass-walled cabin overlooking the central Mumbai skyline. He is grateful for inheriting a clean and strong balance sheet, good business growth, and a fairly satisfactory financial story. The positives are coupled with transformation challenges, he adds.For a modern management, taking a long- term approach, backed by a commitment to strengthening existing foundations while building on them, meant gradation of not just processes and technology systems, but also bringing about a change in people's mindsets, he says.

Ahuja knows that the bank's biggest strength is its historic business and consumer relationships: these helped in keeping its balance sheet stable, its asset quality healthy, its ambitions in focus and fuelled its two-phase expansion — phase I was about increasing the presence of Ratnakar Bank in western India; phase II is about covering states with high per capita incomes.

Technology is a hallmark of modernity, and it is no different for a bank. As part of its transformation, Ratnakar recently implemented core banking solution; specialised groups have been created for commercial, retail, agri banking and for financial inclusion. Loan recoveries have picked up too, bringing down non-performing assets (NPA). Archaic business applications have been replaced with integrated systems technology. Even Internet banking systems have been launched. And it has all been good for business.

Promise And ChallengesTypically, the banking sector grows at 2-2.5 times the GDP growth rate; in other words, a good bank can grow at over 15 per cent on a sustainable basis. Over the last 3-4 years, Ratnakar has seen a compounded annual growth rate of 25 per cent. From FY07-FY11, net interest margin — the difference between what it makes in interest income from loans and what it pays on deposits — has been 4 per cent. In FY12, deposits grew by 70 per cent to Rs 3,478 crore and loans by 53 per cent to Rs 2,907 crore.

While the bank's expansion plans are ambitious —200 new branches in the next three years and growth of about 40 per cent — Narayan says they are doable.

"We really liked the strong management team led by Vishwavir Ahuja, the bank's market positioning, its vision for growth and the fact that this has been a well run bank in the past from a credit-quality perspective," says Niren Shah, managing director of NVP India which has invested $16 million in Ratnakar Bank.

Okay, so capital will not be a problem. But what about its deployment? "The management will have to take some bold steps to achieve growth," says one analyst, requesting anonymity. Others think capital has been kept idle — the capital adequacy ratio (CAR) on 31 March 2011 was an astounding 56.4 per cent,  most of it tier-I or equity. Ahuja is quick to point out that the capital would be deployed over two years. In FY12, CAR was reduced to 28.15 per cent, and the growth in the loan book will cut it to 14 per cent in FY13, he says.

So far, so good. But with rapid expansion comes a whole set of other challenges; for instance, says Dubey, small and medium enterprises are high-risk ventures. In FY11, the bank's profits took a 35 per cent hit, mainly due to pension plan dues, enhancements in gratuity limits and payment of arrears.

Ahuja says his biggest challenge is integrating two different workforces: one that is steeped in old-world values  and unionised,  and the new-age staff that has never worked on manual platforms.

The bank's small size is no deterrent for Ahuja. He has chosen to pitch himself not against Ratnakar's compatriots, but against the bigger private sector banks, and the smaller public sector ones. "Go on, raise your eyebrows" he says. In banking growth terms, he wants to raise the roof. To deliver on this commitment, he will have to stick around for a while. The way things are going, it will perhaps not take him as long as Ratnakar's been around.