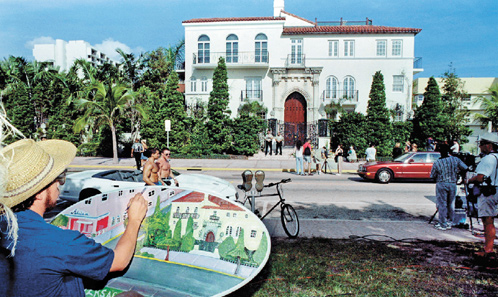 08 November, 2014
Print this article Font size -16+
The Library Hotel in New York city is a rather different kind of hotel. Make no mistake; it is a luxury hotel. It has 10 guestroom floors, but only 60 rooms. Each floor is dedicated to one of these 10 themes: social sciences, literature, languages, history, math & science, general knowledge, technology, philosophy, the arts, and religion. (For example, the third floor is dedicated to social sciences.) Each room is stocked with 25-100 books on subjects that the floor is dedicated to. For instance, the rooms on the fifth floor — the math & science floor — have books on astronomy, dinosaurs, geology, mathematics, etc.

The rooms also have theme-based décor, ranging from mysteries to fairy tales and from music to architecture. The hotel also offers personalised service (rare in luxury hotels in the West), latest technologies such as Wi-Fi connectivity, and unique special packages such as an erotica package (complete with a host of take-home gifts that are designed to keep your senses alive), or even a Broadway package (with two complimentary tickets to a Broadway show).

The Library Hotel is not a regular, branded, assembly-line-like five-star hotel; it is a boutique hotel. Boutique hotels are characterised by their, um, unique characteristics. "Every boutique property should have its own personality and style," says Samrat Banerjee, unit head of The Manor in New Delhi. "Every part of the hotel, be it services, design or ambience, should define that personality." The Library Hotel fits that description perfectly.

Boutique hotels have been around for a while now, and are becoming increasingly popular. So popular, in fact, that even branded hotel chains are now hooking up to the ‘boutique' bandwagon to try and get a slice of the burgeoning demand. The rush to be labelled a boutique hotel has blurred the lines of what is a boutique hotel, with conflicting definitions being bandied about. Originally, a boutique hotel was a small hotel, with up to 50 rooms, a unique theme (such as, say, a castle), and offering 24x7 personalised services. "Today, the concept of boutique hotels has changed to include any hotel that has some unique feature, be it design or anything that is different and which stands out," says Rubal Chaudhry, general manager of The Claridges in New Delhi.

In fact, boutique hotel ‘chains' have also come to exist, with many more rooms, though they do strive to offer a ‘different' experience. US-based Epoque Hotels, for instance, has 350 properties across more than 100 locations worldwide, but each property has been themed on the characteristics of the city it is located in. In that sense, each property is still a ‘boutique' hotel. For instance, the Albabenshal Hotel in Egypt's Siwah Oasis, is located outside the ruins of Old Shali a 13th-century fortress, and has been built to resemble the structures that were once in the fortress. This hotel has only 11 rooms, but there are other boutique hotels by other companies that have upwards of 500 rooms as well, but they all attempt to be unique in some respect.

The boutique hotels space has been seeing a lot of action lately, with the catchphrase being that if you're not staying at a boutique hotel, you're just not hip enough. A good example of a new boutique hotel is The Villa by Barton G. (housed in the former Versace Mansion) in Miami. The 1930s estate, which was home to the late fashion designer Gianni Versace, is now operated by Barton G. Weiss, and has a 10-room boutique hotel. Rooms come for $2,000-5,000 a night, and there's a butler service, too.

Another trend catching on fast is of fashion designers creating the designs for boutique hotels. Perhaps the most talked about new boutique hotel is the Armani hotel, which opened recently in Dubai's Burj Khalifa tower. The luxury boutique hotel with the capacity of 160 rooms has been crafted by the Italian designer Giorgio Armani himself.

It includes multiple restaurants, a spa and an outdoor swimming pool. The hotel's high-end suites (at $2,180 a night) include a living room, dining room, walk-in closet, study and full service bar.

So, next time you plan to stay at a luxury hotel, you might want to try and live the unique experience of a boutique hotel.