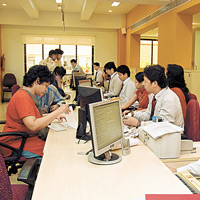 08 November, 2014
Print this article Font size -16+
In an attempt to help public sector banks increase lending activity and meet capital adequacy norms, the government on 10 January okayed a proposal to infuse Rs 12,517 crore into public sector lenders. The move will benefit 9-10 public sector banks. The Centre had earmarked the amount in the Budget for the current financial year. The funds are to be distributed before March. The government has been injecting funds into public sector banks over the past few years to improve their finances.
In FY11 and FY12, it pumped in funds to the tune of Rs 32,000 crore. Of this, Rs 12,000 crore was released in 2011-12 to public sector banks to help shore up their capital adequacy ratio. In the previous fiscal, the government had injected Rs 20,157 crore into public sector lenders, taking its equity in some banks to 58 per cent.
Low Marks
Citigroup has downgraded India’s credit rating to ‘underweight’ from ‘neutral’. It said that a rebound in economic growth, corporate risk appetite and the investment cycle might not be in line with current expectations.  However, the bank has added that more government reform action, along with easing inflation and falling interest rates, should support equities.
Changing Track
Railway minister Pawan Kumar Bansal announced an across-the-board fare hike of up to 25 per cent on 9 January. The new fares will come into effect from 21 January. “The increase in fares is likely to help the railways raise Rs 6,600 crore in incremental revenue (over two months),” said Bansal. Rail fares have witnessed a hike after a decade. Early last year, an attempt to do so failed.
No Sahara
The apex court has dismissed a review petition by the Sahara India Real Estate Corporation and the Sahara Housing Investment Corporation. The plea was filed by the two Sahara companies to review the court’s 31 August judgment.  The court had directed the companies to deposit
Rs 17,400 crore along with 15 per cent interest with the Securities and Exchange Board of India within three months.
Caught In Crossfire
Australian firm Perdaman Chemicals and Fertilisers is suing ICICI Bank for A$3.5 billion. The firm has been embroiled in a dispute with  Lanco Infratech concerning a stalled fertiliser project. Allegedly, Lanco reneged in 2011 on a 25-year deal to supply coal to Perdaman’s planned coal-to-urea project. ICICI Bank is the lender to Griffin Coal which, in turn, is owned by Lanco Infratech.
Too Much Heat
Tamil Nadu’s attempt to create 1 gigawatt of solar capacity is facing a legal challenge from the Solar Energy Society of India (Sesi). Sesi has filed a writ petition in the Madras High Court seeking to quash Tamil Nadu’s tender, arguing that the guidelines for competitive bidding are not in place. The Solar Independent Power Producers Association has also lodged a complaint with the Tamil Nadu Electricity Regulatory Commission questioning the bid process. Reportedly, the tendering process does not have the approval of the state regulator.
Stepping On The Gas
Mahindra & Mahindra is looking to invest more than Rs 7,000 crore across its automotive businesses over the next four years. The sum is to be used for adding manufacturing capacity, new engine development and common vehicle platforms, Pawan Goenka, president for automotive and farm equipment sectors, said on 9 January.
Relief In Sight
C. Rangarajan, chairman of the PM’s Economic Advisory Council, has said that India’s headline inflation could moderate to 6 per cent in FY14. “Some adjustments have been made in administering prices; it is good from the medium-term point of view. I expect the inflation rate to come down to the region of 6 per cent in the next fiscal,” said Rangarajan on 10 January on the sidelines of a conference organised by Indian Institute of Foreign Trade.