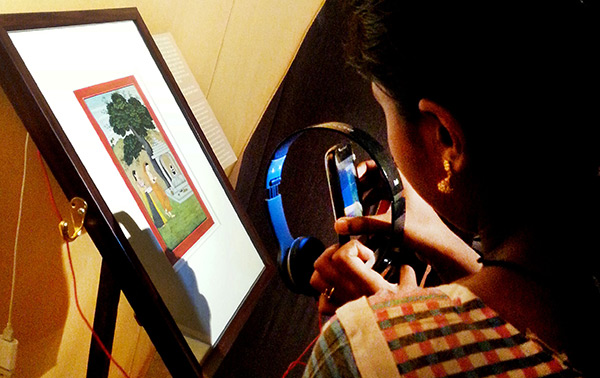 08 November, 2014
Print this article Font size -16+
The thing about being culturally inclined - but clueless - and attending an art exhibition is that one walks through the gallery feeling amazed but lost. Over the past month, I’ve managed to visit the Subodh Gupta Retrospective at the National Gallery of Modern Art, New Delhi, gaze at Amrita Shergill’s revolutionary work also exhibited there, and take a walk through history and the understanding of the human body in art over centuries at the Body in Indian Art exhibition currently on at the National Museum in New Delhi.

But the differentiating factor between my visits to the first two exhibitions (countless ones before them) and the Body in Indian Art was that my walk-through in the latter was led by the show curator Naman Ahuja, who is also an associate professor at the Jawaharlal Nehru University. And, quite honestly, that’s what made a universe of a difference.

How else would one appreciate the layout of the exhibition across 14,000 sq. ft in a circular fashion, as a body that’s wrapped around you? Starting an exhibition on the body with a display on ‘death’ may be counterintuitive to most, but all art is in some way a record of death, says Ahuja as he stands between two memorial stones at the entrance to the exhibition on the first floor of the museum. “Every work, after all, is a death of the artist. A moment that can't be recreated,” he says.

The exhibit explores the artist’s interpretation of the body in death, birth/re-birth, in rapture, or even what may be the Indian equivalent of da Vinci’s Vitruvian Man. The whole exhibition is divided into eight galleries — (1) death, and the end of the body, (2) birth and re-birth, (3) how astrology and cosmology determine the fortunes of the body, (4) the nature of divine bodies, (5) heroism and ideal bodies, (6) asceticism and the development of practices of healing and yoga, (7) the body in rapture or possessed, and (8) the body as a symbol.

It was fascinating to hear the thought behind the conception of the exhibit, which starts with memorial stones — first, an evocative sculpture of a warrior disembowelling himself with a sword (reminiscent of Japanese warriors performing Harakiri), and alongside is a rather rare sculptor of a female warrior performing a similar ritual, both being serenaded by apsaras.

As one moves to the gallery of death of the body, and remembrance, there is a huge Sanjhi Tree cut out by Payal Khurana that arrests your attention. Take a walk through the various symbolisms of ‘death of the body but the continuance of the soul’ — from a beautifully craved crypt, to a series of Buddha footprints, etched, painted or sculpted, spread across the centuries that act as a substitution of the physical being, just like Rama’s slippers were kept on the throne while he was on vanavas in the epic Ramayana.

What strikes a chord with the viewer is the juxtaposition of sculptures and paintings cutting across centuries, religion and gender. Ahuja talks of the birth and rebirth gallery as being designed to resonate a woman’s womb, with all the energy directing you towards Mrinalini Mukherjee’s Basanti — a powerful vision in dyed hemp, weaved suggestively as a flower or even representative of a woman’s reproductive organ. This is contrasted with the strangely erotic ancient goddess Lajja Gouri giving birth with her legs spread wide and a 2nd century red sandstone headless sculpture of Hariti — the Iranian ogress who turned from eating babies to a protector of children.
Leading us to the third gallery, crossing imageries of the happy families of Shiva-Durga-Ganesh-Kartik, Yashodhara-Krishna-Nanda, among others, Ahuja commented on the irony of such iconic families of Indian mythology actually being quite unconventional in their formation — with the birth of the children in the first family happening during the absence of the father, and the latter of a child living with foster parents. As Ahuja said, “There is no norm in mythology as to what constitutes a happy family.” Now, although, these are summations that would seem fairly obvious to some, for others — such as myself — one has to admit to the deeper insight gained due to these observations by the curator, whose “‘thing’ is supposed to be his vast knowledge of which artwork is housed by which museum across the country”, according to one of the organisers.

From birth to cosmology and the divine, the exhibition evokes the mysteriousness of the body and that of the universe. From the corporeal to the spiritual — what controls us? WHat is the role of destiny? One can debate the existence of free will as influences from Buddhist, Hindu, Jain and Tantric schools of thought are represented through the human form so as to contain the whole universe within it. Which is probably why, then, there is a rather easy transition to that of the ‘ideal’ form — that of the supernaturals — gods and deities. Though, Ahuja does take a sceptical point of view on the immortals, saying: “Gods aren't just immortal, public relations turn them into immortals”, while simultaneously and appreciatively pointing out the nuances of the imagery, down to the reasoning behind the selection of a particular stone that would naturally look like flakes for a sculpture of Nagaraj.

The iconography is further accentuated as one walks through walls covered with graphic depictions of superheroes in the 21st century in comics, and their ‘ancestors’ as humans or ‘mere mortals’ who were immortalised in ‘stone and paint’ as Heroes. From the evocative video of a towering Buddha statue being bathed to the quiet and meditative, headless nude female yogini Mallinatha — shorn of all accessories — strategically ‘facing’ the Dvilingi Lakulisha, it’s amusing to be a participant or voyeur to the various silent conversations Ahuja has initiated between the art pieces.

The Body in Indian Art exhibition is by every means vast, but Ahuja does achieve what he sets out to do — steadily depict the echoing of similar concepts of death, birth, sex and existentialism across the ages and in varied vocabularies. In end, if it’s the pure rapture in a woman’s ‘angrai’ or the attempt to search a commonality between ragas that have been recorded to accompany the 16-17th century raagmala paintings, the exhibition is a journey that is definitely worth experiencing for yourself.

The Body in Indian Art is on till 7 June, 10am-5pm (Mondays closed), at the National Museum, Janpath, New Delhi. There are regular walks conducted by the museum, which is highly recommended, and another curator’s walk with Naman Ahuja is scheduled for 9 May 2014. Call 011-23019272 (extn 273) for timings and further details.