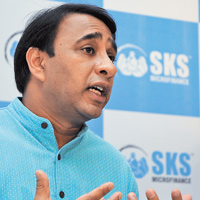 An idea whose time had come, propagated by a visionary leader; a dream IPO, followed by a even dreamier listing on the stock exchanges; and out of the blue, the sudden sacking of its chief executive who was brought in by the visionary leader himself, with no apparent or clearly identifiable reason. It is no wonder that the investing public and most analysts were shocked by the abrupt dismissal of Suresh Gurumani, CEO of SKS Microfinance, by Vikram Akula, founder and now the company's executive chairman.

Institutional investors — the largest shareholder is Sequoia Capital, the private equity firm — also seem at a loss to explain what happened. From most accounts — neither Akula nor Gurumani have been forthcoming on the issue — the decision was forced when negotiations on how and when Gurumani would exit, and at what price, broke down after Akula decided he wanted to take back executive powers.

After agreeing on the financial consideration — reportedly 125,000 vested options and a year's salary as compensation — the discussions collapsed over the terms of Gurumani's future employment; SKS's condition was that Gurumani could not work for any other financial services firm that could potentially start a microfinance business that would be competition to SKS. For Gurumani, that virtually rules out working in the financial services sector.

On 6 October, Gurumani filed a petition in the Andhra Pradesh High Court seeking a stay on his termination; sources say the hearing has been admitted, but adjourned to 19 October.

While he is the founder, Akula is not the largest shareholder in SKS. He holds less than 5 per cent, most of it being held by institutional investors, trusts and the general public. SKS's market capitalisation is over Rs 8,000 crore, making it larger than many banks.

The idea may seem far-fetched, but this development could worry the Reserve Bank of India (RBI). On the one hand, microfinance institutions can play a big part in pushing the financial inclusion agenda, while on the other, the central bank has expressed concerns about the sustainability of microfinance business models. More importantly, SKS could well apply to become a bank once the new bank licensing guidelines come into force.

Past experience with professionally run banks that were launched by individuals has not been great. Both Ramesh Gelli's Global Trust Bank and Dev Ahuja's Centurion Bank were run by forceful individuals, who did not have very large stakes in the institutions they owned, yet their writ ran large. Both collapsed, and had to be rescued. Given the RBI's mandate for maintaining the financial stability of the system as a whole, it scrutinises all important financial institutions very carefully.

Stockmarket regulator Securities and Exchange Board of India (Sebi) is reported to have asked SKS for an explanation for Gurumani's sacking (the company's CFO has already explicitly stated that there were no "financial irregularities"); if the reason advanced — Gurumani's alleged non-performance as CEO, which the substantial revenues and profits seem to contradict — was a material fact at the time of the IPO, it needed to have been disclosed in the draft prospectus filed with Sebi.

As Jim Collins, management guru and author, observed, a charismatic CEO (like Akula) can win every argument regardless of the facts. A non-charismatic CEO has to win on the merits of the argument. How things pan out for Akula, Gurumani and SKS may well depend on whether investors see that distinction.