Blame It On Politics 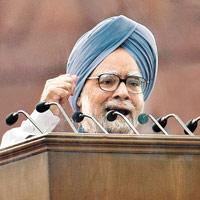 08 November, 2014
Print this article Font size -16+
Prime Minister Manmohan Singh was a worried man on the Independence Day. Speaking at the Red Fort, he blamed lack of political consensus for the UPA government’s inability to introduce the much-needed reforms and bring in investments. “If we do not increase the pace of the country’s economic growth, take steps to encourage new investment in the economy... it most certainly affects our national security,” said Singh. The PM’s concerns come at a time India’s GDP is expected to grow at a slower pace this fiscal given tough external conditions and delayed reforms in key sectors of the local economy. That said, the PM was optimistic, and promised that the government would work for rapid economic growth and shield the nation from the impact of the global slowdown. “The period of difficulty will not last long,” said Singh. Sounds good.
Back To Work
Maruti Suzuki will restart production at its trouble-hit Manesar factory on August 21. The plant was shut a month ago after a workers’ riot in which a manager was killed and over 100 were injured. Maruti said it had fired over 500 workers following the incident.
Cross Over To Competition
Former General Motors India head Karl Slym will become managing director of Tata Motors from
1 October. Slym will lead Tata Motors in India, South Korea, Thailand, Spain, Indonesia, and South Africa. Slym has worked with GM for 17 years.
The Fall Season
India’s merchandise exports in July fell 14.8 per cent to $22.4 billion, compared to $26.3 billion a year ago. This was the steepest fall in exports in 35 months; it had fallen 23.59 per cent in August 2009. Imports also declined 7.78 per cent to $37.9 billion, against $41.1 billion in July 2011, according to the commerce department.
Market Makeover
Stockmarket regulator Sebi made key changes in rules for initial public offerings and mutual funds. Sebi has liberalised IPO norms to allow e-IPOs. The regulator will frame new rules for investment advisers and fast-track clearance to public offer documents of companies. It has also suggested that service tax on mutual funds can be charged from the investor, instead of the asset management firm.
Name Of The Game Is Bond
ICICI Bank raised $750 million (about Rs 4,200 crore) through bond issues in the international market. The 5.5-year, fixed rate notes carry a coupon rate of 4.7 per cent and were issued at 99.813 per cent of the value of the bonds. The bonds were sold through the bank’s Dubai branch.
PE Pain
Is it all gloom in India’s private equity (PE) space? Private equity investments in the country fell 35 per cent during April-June, said a report by consulting major PwC. PE funds invested $1,616 million in 97 deals during the quarter, which is 23 per cent lower in terms of number of deals compared to the previous quarter.
Fear Of Red
Chinese Premier Wen Jiabao warned that the Red economy was under pressure and its problems could last longer. That said, he said Beijing would be able to meet its growth target. He said that easing inflation had given
more room to policymakers to bring in measures to spur growth. China’s industrial output growth fell to a three-year low in July.
Content Search
Search giant Google will buy the Frommer’s travel guide business from publishing giant John Wiley & Sons for an estimated $25 million. The deal complements Google’s 2011 purchase of Zagat Survey, which offers reviews and ratings of hotels and other businesses. Experts say Google can now take on the likes of Yelp and TripAdvisor. The acquisition also marks Google’s entry into original content production.
Libor Dragnet
Seven banks, including HSBC and Royal Bank of Scotland, will be quizzed in the US for alleged manipulation of the Libor inter-bank lending rate. A few weeks ago, Barclays was fined £290 million in the UK for rigging Libor rates.