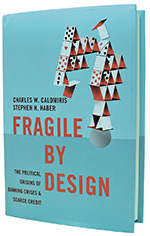 17 November, 2015
Print this article Font size -16+
When things don’t work out according to one’s wish, the most obvious human response is to ‘blame it on politics.’ These are the opening thoughts of the book, Fragile by Design: The Political Origins of Banking Crises and Scarce Credit,’ by Charles W. Calomiris of Columbia University and Stephen H. Haber of the Hoover Institution at Stanford.
The authors approach is that the banking system’s strengths and shortcomings are predictable consequences of political bargains which are structured by society’s fundamental political institutions. They examine why some societies are able to construct banking systems that avoid crises while others are not able to do so.
For example, why has Argentina had four crises in the last 40 years and Australia none? Or why have the US and Canada — two countries that have similar legal arrangements, and share a common culture and a fundamental belief in tempered free-market capitalism — had such different experiences with their banking industries? Since 1840, the US has had 12 systemic banking crises and Canada has had none.
Written in the aftermath of one of the worst banking crises in 2008, the authors revisit one question that is still doing the rounds: Could the Lehman Brothers have been saved? If JPMorgan was given a lifeline, then why was Lehman Brothers deprived? While some pinned the blame on the corrupt business practices of Wall Street and the greed of bankers, some have taken a counterview in pointing fingers at the government corridors.
The authors are sticking their neck out while blaming bank failures to politics. Calomiris and Haber argue that politics is baked into the banking business. On one hand, the government defines the legal framework under which banks operate, regulates them through a regulator, that is, on an arm’s length basis, and on the other hand, the government often finds itself in a somewhat equivocal position when it comes to banks. For it is itself a big borrower and always in need of financing, where better to turn to than the banks to monetise its fiscal deficit? Ultimately the losses on account of bailouts are shifted onto taxpayers.
The authors’ four years of research reflects in the way they have chronicled several examples, with cross references. But by and large the coverage is in the American continent right from Canada, US, Mexico, Brazil, and Argentina (UK and France being an exception). I wonder how much of this theory of political interference for a banks’ failure is relevant in the Indian context. Indian Banks have weathered the South East Asian crises of 1997 and the 2008 US subprime storm pretty well, haven’t they?
India's central bank, the Reserve Bank of India (RBI) really stands tall among tall central banks for its stringent and prudent supervision. Unlike in some of the western countries where multi-stakeholder interests come into play, the RBI is clear in its role as the protector of depositor money. Over the years, they have prevented banks from going under through different solutions.
However, India has had its share of loan melas and loan waivers with the socialist philosophy imposed on nationalised banks which is on account of  political influence. These banks did not go down, however it did impact  their balance sheets. The argument that the owner and the subsidiser being the same (read: government) does not hold good when it is viewed through the lens of governance and risk management.
By nature, banks are  “leveraged” institutions. The book examines that banks have to bear the impact of populist measures, implement policies and schemes for social welfare, all driven by political  design and construct.
If you are looking for juicy details on the recent financial crisis, Fragile by Design is probably not the book to read. But if you are looking for an understanding of banking over the last couple of centuries and the role played by politics in its evolution, then the book is an interesting study.