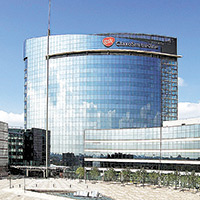 08 November, 2014
Print this article Font size -16+
British drug maker GlaxoSmithKline (GSK) was accused by the Chinese police of channelling bribes to Chinese officials and doctors through travel agencies to boost sales illegally and raise the price of its medicines in the country. The GSK case is the highest profile corporate investigation in China since 2010, when four executives from mining firm Rio Tinto were jailed for taking bribes and stealing commercial secrets. GSK is said to have transferred around 3 billion yuan ($489 million) to over 700 travel agencies since 2007. Four senior Chinese executives from GSK have been detained and, according to the Ministry of Public Security, the GSK executives in China had confessed to bribery and tax violations. On GSK’s part, it said it was deeply concerned by the developments and had stopped using the travel agencies identified and was reviewing all third-party agencies and related transactions.

Dream Sours
Britain’s Air Accident Investigations Branch said a transmitter made by US firm Honeywell was one of several components that may have caused a fire on a Boeing Dreamliner in London on 12 July. Coming months after the Dreamliner was grounded because of overheating batteries, the incident has raised alarm, with some analysts saying the new, high-tech jet can ill afford any more problems. “We need to know now if this is a one-off or a problem for the whole Dreamliner fleet. That’s the crucial point for Boeing and airlines,” said one analyst.

Firm Hand
Microsoft CEO Steve Ballmer made sweeping changes to the company’s organisational blueprint — which, more than ever, bears his stamp. The face of Microsoft since he took the reins from co-founder Bill Gates in 2000, Ballmer stressed the importance of improving internal collaboration and eliminating redundancies. But some analysts say the changes also mean less leeway for Microsoft’s individual businesses to set and pursue their own agendas, as the firm imposes a more streamlined, top-down approach to its strategy and operations. That Ballmer, who presided over a decade of share price stagnation and was deemed slow to respond to mobile computing, remains more entrenched may worry investors and spur concern that the reorganisation will truly effect change. There was no clue to any succession strategy in Ballmer’s announcement.

It’s Red For Green
China plans to restrict vehicle sales in eight more cities to curb traffic congestion and pollution. But car makers are not worried — expecting organic growth in the world’s biggest auto market to outweigh any restrictions. Environmentalists too say the measures are unlikely to work. New car sales are already restricted in Beijing, Shanghai, Guangzhou and Guiyang, with limits on licence plates and consumers being sold plates through auctions. “We expect the restrictions to have a limited impact on new car sales,” said Bob Socia, head of China operations, General Motors.

Smart Buy
Baidu, China’s top search engine, plans to acquire app store 91 Wireless for $1.9 billion to strengthen its foothold in the country’s $48 billion (2014 projection) mobile Internet sector. Baidu will buy a 57.4 per cent stake in 91 Wireless from NetDragon Websoft, and the remainder from other shareholders. The acquisition will help Baidu work more closely with the apps developer to improve its search engine.

Big Little Plans
Automakers like Honda Motor and the Toyota-Daihatsu are all set to take their ‘kei car’ concept of microcars (like Honda’s hi-tech N BOX) out of homeground Japan and into Indonesia, India and other emerging markets. Rising fuel costs and a fast-growing middle class in these countries make them likely to be the first microcar customers. Honda and Toyota are not the only ones. Mitsbubishi and Suzuki are also looking to popularise microcars outside Japan.

Freeze Frame
Ford Motor has been hit with a class action suit claiming it neglected to fix defects in vehicle touchscreen control systems that create safety hazards for drivers. The lawsuit was filed in a US district court by a non-profit driver safety group. According to the lawsuit, customers have complained that the MyFord Touch system freezes up, malfunctions, blacks out and fails to connect with mobile devices. The complaint said system flaws have created “significant safety risks” for drivers, diverting their attention from the road when the product malfunctions and failing to contact 911 during emergencies as designed.
Presidential Date
Pakistan will hold the presidential election on 6 August to replace incumbent Asif Ali Zardari, whose term ends in early September. Zardari said he doesn’t plan to run for a second term and will, reportedly, leave the country after his successor comes in. His party, the Pakistan Peoples Party, suffered a heavy defeat to PM Nawaz Sharif’s  Pakistan Muslim League-N in the parliamentary elections in May. Thus far, none of the main parties has announced presidential candidates, but they must do so by 24 July.