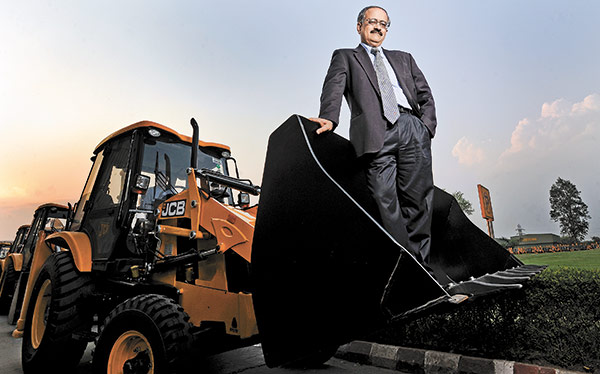 08 November, 2014
Print this article Font size -16+
Some 30-odd kilometres south of Delhi is the dull, drab industrial town of Ballabgarh — home to the 66-acre campus of global construction equipment major JCB. The verdant campus, in stark contrast to its surrounding, is dotted with hundreds of yellow 2-tonne backhoe loaders (vehicle with arm and bucket at the back and a loader in the front) ready to be shipped out across India and abroad. After all, the world’s largest backhoe loader manufacturing plant rolls out an average of 100 machines every day.

For the £2.7-billion, Staffordshire, UK-based JCB, the action is very much in India. And, why not? While the global construction equipment market is growing at a meagre 5 per cent, India is clocking a healthy 15 per cent. And JCB has been the prime gainer. So much so, the company accounts for close to half the backhoe loaders sold annually in India.

JCB chairman Anthony Bamford recently called India a hub and said it was a crucial destination for the world’s third largest construction equipment manufacturer by volume. Interestingly, for a company with operations in close to 150 countries, India is truly the crown jewel, accounting as it does for a little more than a quarter of JCB’s global revenues.

JCB entered India in 1979 as a joint venture partner with Escorts. As the Indian economy grew, JCB bought out its partner in 2003. It brought in the latest technology from Europe. This gave the company the much-needed edge over peers such as state-owned Bharat Earth Movers, and pushed it to the No. 1 slot from 2006-07 onwards. With the Golden Quadrilateral project taking off and the announcement of other road projects, the firm gained traction. The company has seen revenues rise from just Rs 450 crore in 2001 to Rs 5,700 crore in 2012.

Named after founder Joseph Cyril Bamford — the Bamford family was ranked the ninth richest in the UK by a business magazine in 2013 — JCB is among the global construction equipment majors looking to grab a bigger slice of India’s growing construction pie. The reasons are not hard to find. The $6.5-billion Indian construction equipment market is expected to be worth a whopping $23 billion by 2020, according to a 2013 Accenture report. Earth-moving equipment accounts for $3.7 billion (57 per cent) of the Indian market, and JCB is currently the biggest player in the segment. “Anybody who needs to dig earth comes to us,” says Vipin Sondhi, MD and CEO, JCB India.

The construction equipment market globally comprises four verticals — earth-moving equipment, material handling and cranes, concrete equipment, and road-building equipment (in descending order of market share). JCB is among the 21-odd global construction equipment majors to have invested in India. These companies are setting store by the central government’s announcement last year that it would spend $1 trillion on infrastructure development during the 12th Five-year Plan (2012-17).

So widespread is the company’s presence in India that its bright yellow backhoe loaders with ‘JCB’ imprinted on them have now become synonymous with earth-movers. While JCB is the market leader in India, it trails the global majors in other emerging markets. It recently entered Brazil and faces immense competition from domestic manufacturers in China. But in India, the firm already has three manufacturing facilities — two in Pune and one at Ballabgarh. One Pune plant is component-oriented and caters to the needs of JCB factories in India and abroad, while the other makes excavators, wheeled loading shovels and vibratory compactors.

The company plans to invest an additional Rs 500 crore over the next five years in a new plant in Jaipur. To be initially used for fabrication work, it is being set up on a 115-acre plot at the Mahindra World City special economic zone. “India is a very important market for JCB. The investment in Jaipur is a vital step to further strengthen our position in this growing market,” says Alan Blake, who recently retired as JCB’s global CEO.

All along, JCB India’s focus has been to meet the needs of road projects. As Sondhi says, the Golden Quadrilateral project saw demand for equipment rise manifold. However, with many road projects getting delayed, JCB saw revenues fall 15 per cent in 2012. So, the company decided to give exports from India a push. In 2012, it exported 970 machines to the Middle East and Africa, over three times the number it exported in 2011.

Surprisingly, Sondhi continues to be unfazed by the slowdown in road projects. “We’re an infrastructure-deficit country,” he says, convinced that demand will soon pick up, and a lot of the action in the sector will start once the 2014 elections are over.

Market Medley
So how does JCB fare in such a competitive market? The answer lies in the numbers. “Almost every second construction machine sold in India today is made by us,” says Sondhi. In 2012, JCB accounted for close to half — over 24,000 of the 49,000—of the backhoe loaders sold in India. Its closest competitors are Caterpillar and Case New Holland.
break-page-break
But the real opportunity lies in the fact that even today JCB India makes only 24 of the 300-odd machines that it makes globally. That is where the investment in Jaipur will help. Fabrication work can be used as a template for machines that will be produced in the future.

JCB is also looking to expand its India advantage. It has set up a 200-person design centre, spread across 18,000 sq. ft, in Pune to cater to its global needs. This is in addition to two design centres that the group has in Rocester and Foston in the UK. Over the next few years, the company plans to add more products to its India portfolio.

The other advantage the company has is its distribution muscle. Today, it has 58 dealers and 500 outlets as compared to 45 dealers and 175 outlets five years ago. This network is much bigger than what any of its competitors have. Across other construction equipment companies, it is estimated that there are a little less than 1,000 outlets.

Though demand has been rising steadily, input costs have outpaced it. The biggest outgo is definitely on steel. The industry has been looking at ways and means to curb costs. “The objective of construction equipment companies all along has been to undertake value engineering projects that prune costs. That, however, is not easy in a world of rising commodity prices,” says an industry consultant.

Apart from production costs, the other issue that needs to be factored in is the cost of ownership. The growing demand for infrastructure entails increasing investment in these machines. Incidentally, it is not large corporations that are picking up these machines that start at around Rs 22 lakh and go all the way up to Rs 50 lakh. Close to 40 per cent are first-time buyers who use the equipment as an investment to get into a lucrative business. Satinder Singh, 32, a petty contractor from Narela near Delhi is one such person. He bought a backhoe loader a couple of years ago on loan. He operated the machine on his own while working for contractors on the six-laning of the Delhi-Jaipur highway. Now, he is all set to add a couple more machines. Says Singh: “Shuruat mein thodi mushkil thi. Uske baad to kaam aata raha hai (It was difficult at first, but the work flow has been steady ever since).”  That, according to Sondhi, is the norm. Most people who start with one machine now have many. He points out that most owners lease the machines out to road developers, while others hire people to run them. Singh can earn around Rs 600 an hour by leasing out his machines to road companies.
To ensure that people operate the machines correctly, JCB has set up operator training centres. This is important as the machines have multiple gears to handle different operations. The centres do not just help bridge the gap between the demand and supply of trained operators but also assist in improving the productivity of the machines due to better operations. Apart from training, they also help people like Singh run their additional machines.

But like with most other equipment, the machines in India need to be far more rugged than in the developed world. That’s because the conditions in India are harsher, the machines are used for much longer periods at a time and operators have to factor in the supply of adulterated fuel. To make the machines cheaper for the price-sensitive Indian customer, JCB has localised its products. More than 80 per cent of the components in the backhoe loader are now sourced locally.

However, JCB has still been quite focused on sticking to a small range of equipment unlike global competitors, which have moved on to make bigger machines that cater to the needs of the mining industry. JCB has no immediate plans to manufacture mining equipment in India. Apart from backhoe loaders, the company also makes tracked excavators, wheeled loaders and compactors in India. At the recent Excon 2013 (South Asia’s largest construction equipment exhibition) in Bangalore, JCB introduced 19 made-in-India machines.

After all, it is the infrastructure deficit that Sondhi is looking to address. That will take a lot more time after the damage wrought by the Uttarakhand floods and the Phailin cyclone. The demand for construction equipment is, however, definitely on the rise. That means JCB should see a lot more orders in the next few months. But, it remains to be seen if it can retain its pole position in a market that is teeming with global companies looking to make a mark.