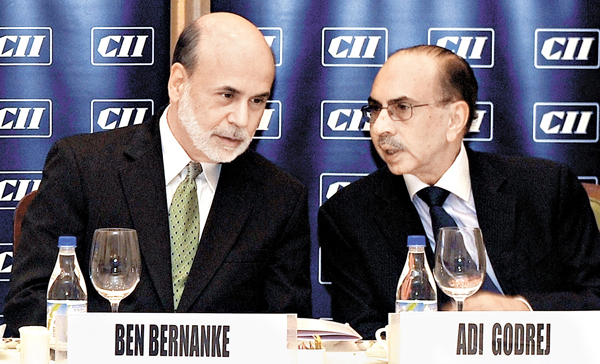 08 November, 2014
Print this article Font size -16+
Will the maiden visit of the US Federal Reserve chairman to India set the tone for further opening of the financial sector here? That’s a billion-dollar question, but observers feel the two-day visit by Ben Bernanke along with US treasury secretary Timothy Geithner benefited both sides. At a meeting with RBI governor D. Subbarao, the central bankers discussed monetary policy and regulatory challenges, banking issues and the global economy. India’s clout in global economic affairs is increasing, said Bernanke after the meeting. The American duo also met business leaders from India and discussed policy issues, including the controversial matter of quantitative easing. Finance minister P. Chidambaram expressed concern over the impact of QE3 on commodity prices during his meeting with Geithner.
Bullish Biyani
Retail baron Kishore Biyani is bullish about the government move to open up multi-brand retail for foreign direct investment. The founder of India’s largest retailer, Future Group, says many private equity funds and retailers, who have long-term vision, will now come to India. Retailers need money to expand, says Biyani, and the government decision will trigger a lot of mergers and acquisitions in the sector.
Steely Growth
Global steel demand is expected to grow by 3.2 per cent in 2013, provided key markets such as China and the euro zone recover, says the World Steel Association. Demand for steel will see a 2.1 per cent growth this financial year, says the body, though this is much lower than the 6.2 per cent growth seen last year.
Slowing Down
The auto parts sector grew 15.7 per cent in 2011-12, posting a turnover of
Rs 2.1 lakh crore, but the growth will fall to 8-10 per cent this year, says industry body ACMA. Investments in the sector fell to around $1.6-1.9 billion in 2012 against $2-2.5 billion in 2011 due to moderation in vehicle sales and a weak market.
Few Takers
The value of merger and acquisition deals involving India fell 24 per cent from a year ago to reach $26.4 billion during the first nine months of the current year. That’s a 24 per cent fall from a year ago.
Mind The Gap
India’s trade deficit in September widened sharply due to a rise in imports. The trade gap grew to $18.08 billion from $13.19 billion in September last year, according to the commerce ministry. It was also wider than the $15.6 billion in August. Exports in September fell 10.78 per cent year on year to $23.69 billion, while imports rose 5.1 per cent to $41.78 billion.
Foreign Money
Indian businesses raised $2.36 billion through external commercial borrowings (ECBs) and foreign currency convertible debentures in August 2012 to fund modernisation, overseas buys and imports. Of this, $1.21 billion was via the ‘automatic route’, while about $1.15 billion was raised through the approval route, according to a report.
Big Fight
For Google’s executive chairman, the Android-Apple platform fight is the “defining fight in the industry today”. Eric Schmidt said Google had “seen” surveys indicating four Android devices sold for every Apple device. Well, that’s an ambitious score. But, he said, within a year, there would be a billion devices running on Android. The sheer volume of mobile device sales dwarfed any platform battle that came before it in the industry, he said, including Microsoft versus Apple in desktop computers.
All For IT
India will spend $71.5 billion on information technology in 2013, up 7.7 per cent from the $66.4 billion estimated for 2012, says research firm Gartner. The telecom market will spend the most on IT — about $47.8 billion in 2013, followed by the IT services with $10.3 billion. Gartner says the computing hardware market in India will reach $9.5 billion in 2013.