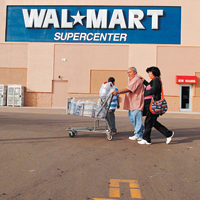 08 November, 2014
Print this article Font size -16+
Bharti Walmart will not wait till all states in India allow FDI in multi-brand retail to roll out its plans and may start opening its outlets from states like Maharashtra and Andhra Pradesh, a top official of the retail giant said on 26 September' 2012. Meanwhile, the Centre asked Delhi High Court to dismiss a PIL  against Bharti Walmart Private Limited and Bharti Retail Limited for alleged violation of FDI policy in retail sector, in the wake of the new policy in the sector.
Bharti Walmart Managing Director and CEO Raj Jain said the company will be able to come out with specific plans with regard to retail business only after 45 days as it is currently studying the government notification.
The company is a 50:50 joint venture between Bharti Group and US-based Walmart for wholesale cash and carry.
"I think there are enough states and big states like Maharashtra and Andhra Pradesh which have expressed their willingness to allow FDI.
"I think those states are big enough to start our plans (for retail)," Jain told a press conference.
Recently, the government had allowed 51 per cent FDI in multi-brand retail but left it to the states to permit opening of foreign funded stores. Such stores would be allowed to be opened only in cities with a population of over one million.
A foreign retailer would need to invest a minimum of $100 million, of which 50 per cent must be on back-end infrastructure within a period of three years of the commencement of the overall investment.

"It is only nine days since the FDA is opened in eight states. It is too early for us to share any clarity or details on our retail plans. We are studying the policy. It will take 45 days to come.

Earlier, Jain inaugurated Bharti Walmart's first 'Best Price' modern wholesale cash and carry store in Hyderabad. This is the 18th store in the country and third in Andhra Pradesh.

"We are ready to open another five to six (wholesale) store in this year and every year we will open about 10 Best Price stores with each outlet of about Rs 35 crore investment.

"We are going to open two stores in AP in the next six months," Jain said.

FDI Policy Renders PIL Against Bharti Walmart Futile: Centre
The Centre told the Delhi High Court on September 26 that the PIL against Bharti Walmart Private Limited and Bharti Retail Limited for alleged violation of FDI policy in retail sector will not "survive" in the wake of the new policy on the issue.

"In the wake of the new policy on foreign direct investment (FDI) in retail sector, it (the PIL) will not survive," Additional Solicitor General (ASG) Rajiv Mehra told a bench headed by Chief Justice Darmar Murugesan.

The ASG told the bench, also comprising Justice Rajiv Sahai Endlaw, that in the changed scenario, when the FDI in retail has been allowed, the petition loses its relevance.

The counsel for scientist and environmental activist Vandana Shiva, who had filed the PIL, also echoed the view of the ASG saying "she would take fresh instructions in the wake of the new FDI policy."

Justice Murugesan, who assumed charge today as Chief Justice, then posted the matter for hearing on September 26.

Earlier, the court had issued notices to the Centre, Bharti Walmart Private Limited and Bharti Retail Limited on the plea seeking a probe against the firms for allegedly carrying out retail trading in multi-brand sector in violation of India's existing FDI policy.

The PIL alleged Bharti Walmart was illegally carrying out multi-brand retail trade despite being permitted only to carry out wholesale cash-and-carry trade here.

Cash and carry is a form of trade in which goods are sold from a wholesale warehouse and customers settle the invoice on the spot.

The PIL also alleged many established Indian firms are acting as "front" for foreign firms to give their offshore partners a "majority control and economic interest" in retail sector here.