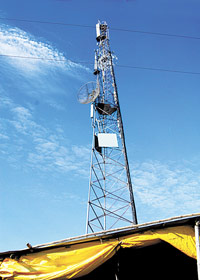 08 November, 2014
Print this article Font size -16+
Bharti Infratel Ltd, the telecommunications tower arm of Bharti Airtel Ltd, is likely to launch its initial public offering to raise up to $900 million (appr. Rs 4, 860 crore) on December 10, sources said, in what will be the country's biggest IPO in two years.
The offer to sell a 10 per cent stake in Bharti Infratel could raise $800 million to $900 million, the sources said, valuing the company at as much as $9 billion. The sources, who have direct knowledge of the deal, declined to be named as they were not authorised to speak to the media.
Bharti Infratel's IPO would be India's biggest since October 2010 when state-run Coal India raised $3.5 billion.
Bharti Infratel expects a go-ahead from the capital markets regulator as early as Friday, the sources said, adding the IPO would open for cornerstone investors on December 10 and for the public a day later.
A Bharti Group spokesman declined to comment.
Bharti Infratel will sell new shares in the IPO, which will be a key test for overseas investors' appetite in a market that has risen nearly 20 per cent so far this year.
"We have got fairly good feedback from foreign investors for this paper and Bharti is a fairly known brand so we are not very worried about the demand," said one of the sources, who is directly involved in the process.
Four private equity investors, including arms of Singapore state investor Temasek and Goldman Sachs, are selling shares in the offer. Hedge fund Eton Park's Anadale Ltd and a unit of Japan's Nomura are also selling.
Bharti Airtel, India's top mobile phone carrier and the owner of about 86 percent of the tower arm, is not selling any shares.
Other private equity investors in Bharti Infratel include Kohlberg Kravis Roberts & Co, Macquarie Group, Citigroup, Investment Corporation of Dubai and AIF Capital.
Bharti Infratel, which has more than 33,000 mobile phone masts, also holds a 42 per cent stake of Indus Towers, which is the world's biggest telecoms tower company, with about 110,000 towers in India.
Mast companies get their revenue from leasing infrastructure to mobile phone carriers. A court order to revoke the operating permits of several carriers in the market that once boasted 15 players has weighed on demand for towers in recent months.
Indian companies raised $7.1 billion from share offerings in the first half of this year, down 4 percent from the same period in 2011, according to Thomson Reuters data.
Bank of America Merrill Lynch, JPMorgan, Standard Chartered, Deutsche Bank, HSBC, UBS as well as India's Kotak Mahindra and Enam are advising Bharti Infratel on the IPO.
Tags assigned to this article:
news 3 stockmarket markets bharti airtel airtel ipo private equity bharti infratel bharti initial public offering