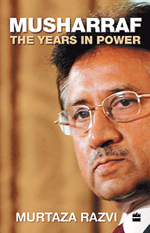 Musharraf: The Years In Power (HarperCollins), talks about nothing new. Yet, Murtaza Razvi's 240-page tome is incisive, lucid and offers some brilliant analysis of Pakistan's ex-President. Razvi takes a matter-of-fact view of the military ruler who in his autobiography, In The Line Of Fire, portrayed himself as ‘the chosen one' to rule Pakistan. But for Razvi, Musharraf was just another military dictator like his predecessors, who did nothing great for his country, got bullied by the US, made a mockery of democracy and made the judiciary and media (which, incidentally, he liberalised to a large extent) his arch enemies.

Perhaps, Musharraf was the first Pakistani leader to admit the inter-provincial disputes within the country. As one of his former aides says, Musharraf believed his policy of ‘enlightened moderation' would steer Pakistan away from Zia-ul-Haq's Islamic state. Importantly, the Kargil fiasco notwithstanding, he genuinely wanted to resolve the Kashmir issue. His willingness to sidestep the UN resolutions on Kashmir was an indication of this. But it was getting tough for him. The Lal Masjid siege was his most embarrassing moment. Again, his remark about women faking rape cases to emigrate abroad damaged his liberal credentials. Finally, the return of Nawaz Sharif, a popular Benazir Bhutto, a hostile judiciary and chaos in the Swat Valley ensured a premature end to his regime.

Do military rulers like him have the benefit of retrospect? Never; what they do have, as this riveting biography points out, is the power to make their countries a better place. And, more often than not, they fail to do so.