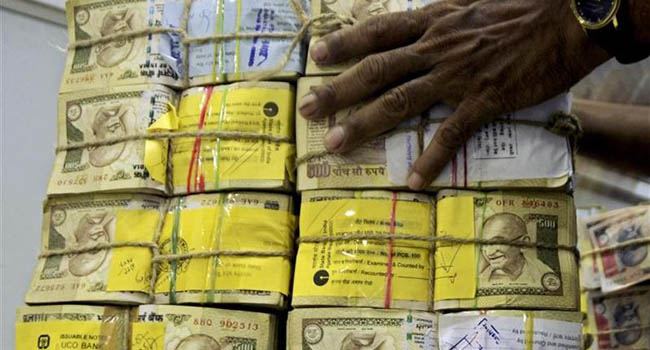 31 August, 2015
Print this article Font size -16+
Despite the Reserve Bank of India (RBI) slashing the statutory liquidity ratio (SLR) — the percentage of deposits that banks have to invest in government securities (G-Secs) – over time to 21.3 per cent from 23 per cent, banks continue to hold around 28 per cent (by way of SLR).
In its Annual Report for 2014-15, Mint Road explains the reasons for the excess holding of SLR by banks: “… the buffer providing access to collateralised borrowings from the wholesale funding market and the Reserve Bank. Maintaining excess SLR securities also helped banks to weather the impact of the current slow phase of the economic cycle on their balance sheets and earnings”.
Simply, put what it means is that bank held excess by way of SLR – that is, they invested higher amounts in G-Secs — as they could pledge them to raise funds from the money markets; and that at a time of dip in asset quality, such investments stood them in good stead.
Data on sectoral deployment of credit, which constitutes about 95 per cent of total bank credit by banks, indicate that deceleration in credit off-take in 2014-15 was more pronounced with respect to the industry and services sectors, which together constituted about 68 per cent of total non-food credit. Credit growth in the services sector was weighed down by its major components: trade and non-banking financial companies (NBFCs) that accounted for nearly 48 per cent of the total credit to the services sector. In the industrial sector, growth slowed down across sectors, particularly for infrastructure, basic metals and food processing. The sectors which witnessed lower incidence of non-performing assets such as personal loans saw higher growth during the year.
Infrastructure accounts for nearly one-third of the credit to the industrial sector. Its main components are power and roads, constituting 60 and 18 per cent of the total infrastructure credit respectively. While deceleration in credit to the power sector was modest, the slowdown was sharp with respect to roads in 2014-15.
Non-food credit growth decelerated sharply in 2014-15 to 9.3 per cent (year-on-year), with incremental non-food credit declining to Rs 5,50,000 crore from Rs 7,30,000 crore in the previous fiscal. A host of factors weighed down on credit off-take, including lower corporate sales, softening of inflation rate, risk aversion by banks due to rise in non-performing loans, and procedural delays in debt recovery. Some in Inc also shifted to alternative sources for financing. Sale of significantly larger amount of non-performing loans (Rs 31,000 crore) by banks to asset reconstruction companies (ARCs) during 2014- 15 also contributed to a deceleration in bank credit. 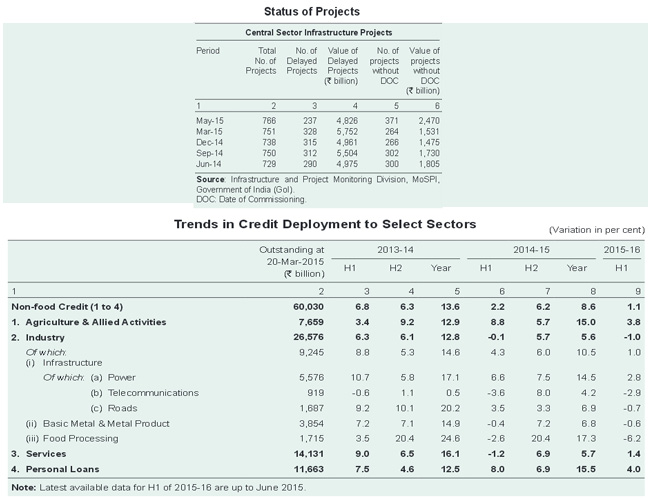 Mint Road’s Annual Report is ominous. It says that viewed in conjunction with other indicators of investment activity such as stalled projects, capital goods imports, production and capex spending, the decline in the private investment intention appears to have become more pronounced in 2014-15 relative to the preceding year. As per the RBI’s data on new projects which were sanctioned financial assistance by banks and  financial institutions (FIs) or funded through external commercial borrowings, foreign currency convertible bonds, domestic capital market issuance, investment intentions for such projects aggregated to Rs 14,590 billion during 2014-15 as against Rs 20,810 crore in the previous year.
“A turnaround in the investment demand cycle, therefore, assumes critical importance to steer the economy on to a sustainable high growth trajectory. The recent experience suggests that a strong step up in public investment may be required to dispel the inertia constraining private investment and to crowd it in, given the robust business sentiment”, says RBI in its Annual Report.
Key to this effort will be putting stranded investments in stalled projects back to work while ensuring the availability of key inputs such as power, land (especially for roads) and skilled labour. Steadfast implementation of structural reforms like the goods and services tax (GST) is also required to reinvigorate productivity and competitiveness. Well, we know that story well.
Tags assigned to this article:
rbi slr liquidity credit banks RBI Annual report