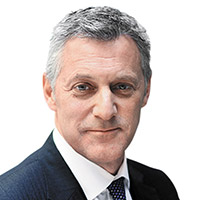 10 March, 2015
Print this article Font size -16+
Former JP Morgan boss Bill Winters will replace Peter Sands as CEO of Standard Chartered as part of a major management overhaul at the bank. Chairman John Peace plans to step down from the board next year. After 16 years at the bank, group executive director and Asia CEO Jaspal Bindra is also leaving. The bank plans to prune the board’s size to 14. Winters, 53, currently runs asset management firm Renshaw Bay. Standard Chartered has been under pressure from investors after its share price nosedived in the past two years following a series of scandals.

House That?
Troubles don’t seem to end for liquor baron Vijay Mallya. A 17-bank consortium led by State Bank of India took over Kingfisher House in Mumbai, worth about Rs 100 crore, as part of its efforts to recover the Rs 6,800-crore loan it had granted Kingfisher Airlines. Once touted as India’s most luxurious carrier and a crown jewel of the Mallya-led UB Group, Kingfisher Airlines has been grounded since 2012. The other collateral left with the banks is Kingfisher Villa in Goa, worth under Rs 90 crore.

he knew that the end was near: “A life is like a garden. Perfect moments can be had, but not preserved, except in memory. LLAP” (LLAP stands for Mr Spock’s catchphrase ‘Live Long and Prosper’). Besides being an actor, Nimoy was a singer, photographer, poet and voice artist.

More Realty Blues
K.P. Singh-promoted real estate major DLF and associate companies were fined Rs 86 crore by markets regular Sebi as part of its probe into the Gurgaon-based firm’s failure to disclose sufficient details during its IPO in 2008. The blow comes on the heels of the three-year ban on DLF from the securities market. In the first order Sebi penalised DLF, Singh, other promoters and top officials Rs 52 crore; in the other, it imposed fines aggregating Rs 34 crore on 34 entities for hiding DLF’s links with Sudipti Estates.

In Hot waters
Climate change expert R.K. Pachauri is the latest high-profile personality to face sexual harassment charges. A woman researcher with The Energy and Resources Institute (Teri) filed a case against the director general, furnishing email, text and Whatsapp messages to back her allegations. Pachauri, 74, has quit as chief of the Intergovernmental Panel on Climate Change, a post he held since 2002. He’s also been barred from Teri.

Under fire
Shashi Shankar, a director in state-owned ONGC was suspended by the petroleum and natural gas ministry for alleged irregularities in a 2011 tender worth Rs 23 crore that was not awarded for a long time. Later, a Pune-based firm bagged the contract, said ONGC sources. Shankar, who was general manager at the time and later officer on special duty to the then director (technical), kept the contract pending, said an ONGC official.

Farewell, Ferrero
Michele Ferrero, considered the Willy Wonka of real-life chocolatiers, died after a long illness on Valentine’s Day, two months before his 90th birthday. The creator of Ferrero Rocher and chocolate-like spread Nutella, he was Italy’s richest man with a fortune of $23.4 billion. Publicity-shy Ferrero never gave an interview. Born in 1925 in Alba, he built a confection empire worth $8.1 billion.

Handsome Reward
Lloyds Banking Group boss António Horta-Osório was paid £11.5 million  as the bank resumed dividend payments to shareholders for the first time since its UK government bailout in 2008. Horta-Osório’s pay deal forms part of the £30-million bonus payouts for the 11 members of the management team he installed after taking the helm in 2011.