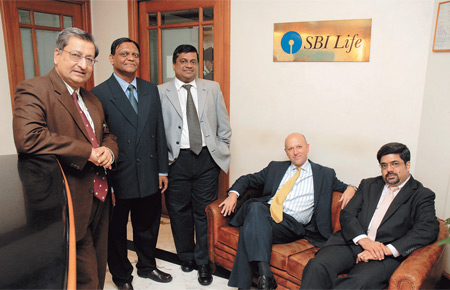 A large part of SBI Life's success is because of its parent. When you walk into your neighbourhood SBI branch to deposit a cheque or pay a bill or even enquire about a loan, you are not far away from an officer who sells life insurance on behalf of SBI Life. This method of selling insurance, called bancassurance, brought in more than 28 per cent of SBI Life's NBI in FY09, and almost 39 per cent in FY08.

"Our bank network kept our costs low," says U.S. Roy, CEO and managing director of SBI Life. With a network of 16,000 branches and 14,000 trained officers to sell insurance, that is a lot of money saved, and operational leverage gained. Setting up a pure retail insurance distribution network — with expenses such as rent, maintenance charges, employee salaries and client servicing costs — would have bled SBI Life for years.

"We did not set out to build the sales force till 2005 (the company was set up in 2001)," says Anand Pejawar, executive director of marketing at SBI Life. "We just had to train our bank officers and keep costs low." Today, the company has 450 retail offices and 70,000 agents. The low costs wrought by bancassurance, coupled with the brand value of SBI, helped SBI Life post a net profit of Rs 34 crore in FY08, although it made a loss of Rs 26 crore in FY09.

The Bank's Assurance
Apart from helping it save costs, a large parent network has helped SBI Life in various other ways. For instance, the bank's corporate clients tend to give their group insurance funds to SBI Life. In FY09, this mode grew by more than 120 per cent to Rs 1,637 crore, and contributed more than bancassurance to SBI Life's income (see ‘Channel Mix'). Then, the bank collects premiums from customers through direct debits from their SBI savings accounts from the second year, reducing paper costs. As a result, operational expenses are the lowest for SBI Life — less than 10 per cent of gross written premium (GWP, which is NBI plus renewal premiums). The industry average for operational expenses to GWP is 15 per cent, with Reliance Life and Max New York Life bearing the highest cost of 30 and 38 per cent, respectively. The arrangement has been beneficial to SBI as well — it earned commission worth Rs 400 crore in 2009.

Other private insurers such as ICICI Prudential and Bajaj Allianz have had it tougher. While the former does ride parent ICICI Bank's 1,500-branch network, most of its business is brought in by its 2,000-office retail network. In FY09, bancassurance brought in 14 per cent of its NBI of Rs 6,812 crore. "Bank networks are yet to be used effectively by insurers," says Sanket Kawatkar, head of life insurance consulting at Watson Wyatt, an insurance consulting firm. Bajaj Allianz does not have a bank to ride on and gets its business entirely from its 1,000-office retail network. By that measure, it has performed extremely well, generating profits of Rs 45 crore on an income of Rs Rs 4,491.63 crore in FY09.

However, bancassurance, based as it is on work done by a bank's employees, can have its drawbacks. For instance, SBI Life attributes the 10 per cent dip in its bancassurance income last fiscal to the Rs 70,000-crore debt waiver for farmers announced by the Centre. With most of the 14,000 bancassurance officers engaged in covering the loan waiver, insurance took a back seat for some time. Of course, huge ramp up in its agency force would have played a part, too.

Though, more than 40 per cent of SBI Life's business in FY09 was done by its agency force, it still needs to expand its agency network to be able to take on the big players in a market where 70 per cent of business is generated through retail format.

Key To The Future
Last fiscal, SBI Life increased its agency force from 30,000 to 70,000 and added 243 offices, but the lessons of thrift have been well learnt. "We are trying to build a low-cost agency model with rentals as low as Rs 10,000 per office," says Rajiv Kumar Gupta, executive director of SBI Life, adding that the average investment in a store was Rs 3 lakh. By end-2010, the company hopes to add 50 more offices. Retail offices are key to increasing premiums, which will in turn increase the assets under management (AUM). SBI Life manages only Rs 18,000 crore, while ICICI Prudential manages Rs 42,000 crore.

That is also because ICICI Prudential has 300,000 agents. But, that has left it struggling with losses of Rs 3,700 crore. The insurance industry as a whole has losses worth Rs 15,000 crore. "The industry will be profitable once the commissions to GWP (ratio) become competitive," says Supriya Rathi, director at Anand Rathi Securities. The commission structures to GWP are the lowest for SBI Life, ICICI Prudential and Reliance Life, at 7 per cent for each.

As it moves to build on its agency presence across India, the fact that the name SBI is virtually synonymous with banking in India will give the insurance company unmatched recall; last fiscal, it spent only Rs 15 crore on advertising and still raised Rs 5,387 crore worth NBI. Others such as Max New York Life and HDFC Standard life have been able to generate NBI worth only 25 times their ad spends. "Simple consumer-driven communication has helped us make more money for every rupee spent on advertising," says Chandramohan Mehra, head of branding and advertising in SBI Life.

An Edelweiss report says that bank-backed insurance models will succeed in the long run, adding that ICICI Prudential, SBI Life, HDFC Standard Life and Kotak Mahindra Old Mutual are most likely to last the distance. Yes, but going solo will not help; a combo of bancassurance and retail is needed to get the winning edge.