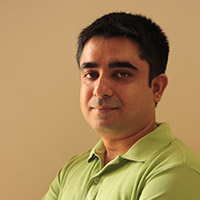 08 November, 2014
Print this article Font size -16+
Why this book? And why do you think should a reader pick up this book?
I grew up in Banaras, a city that revels in its dichotomy. As a teenager I was surrounded by very interesting, colourful people and was witness to funny, often bizarre events. I left the city in the late 1990s but the city, its people and their stories never left me – I knew it was something I would write about someday. Also, the coming-of-age genre is a bit unexplored in India. The angst, confusion and loss of innocence that typifies the transition from adolescence to adulthood – I wanted to capture that.

One book blogger mentioned in his review of The Virgins: "The book grips you so well that you just can’t put it down."

The story isn’t typical of what you would expect from a coming-of-age story about three teenagers – it’s a small town story and the events and characters are authentic and funny in an unexpected way. Also, Banaras, in most novels I have come across, is depicted as an exotic, spiritual city. A few others would look at it as decrepit and rotting from the inside. I have attempted to look at the city differently – like a weird, funny, eccentric old man with a split personality.

What does the book mean to you?
If I had to write one book, this would be it.

How difficult was it to put the book together?
I started writing this book sometime in November 2011. I soon realised that it can’t be done along with a regular job. I quit my day job as a consultant. I finished the book in about 7 months. Those were difficult times. Very few people believed in my potential as a writer or the market worthiness of this book. They thought I was a fool to have taken a break from a promising career to write.

Tell us about your writing schedules. When and where do you write?
I follow a fixed routine when I am writing. I write for 3-4 hours in a day and then I do a first round edit of what I have written the same day in the evening. I leave 1-2 days in a week to just make notes, doodle, think about the novel – everything else but write.
What’s your energy drink?
Tea, UP style. The milky, sugary, ginger laden concoction that tea connoisseurs love to hate.

What makes a book a really good read or a bestseller?
A well told story is important. The rest of the code hasn’t been cracked yet.

What's the hardest thing about being a writer?
Living in two worlds at the same time – the world of your novel and the characters in it; and the ‘real’ world – with buffaloes jumping on your windshield and people telling you what to do all the time. It’s a difficult balance.

How did you find a publisher for your book considering this is your debut novel?
I finished the first part of the book (around 80 pages) and sent it to a literary agent along with a brief synopsis. He found me a publisher who believed in this book. However, I don’t think getting an agent is necessary. Indian publishers are more than happy to consider manuscripts sent by e-mail and/or hard copy.

What are you reading now?
Journey to the End of the Night by Louis-Ferdinand Celine

Ebooks or paper format?
I prefer paper. No particular aversion to ebooks though.

So, what’s next?
I’m working on my second novel. This one is going to take longer to write.