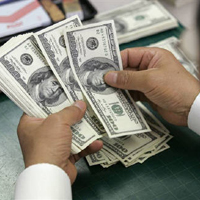 08 November, 2014
Print this article Font size -16+
India's balance of payments was in surplus for a third straight quarter in April-June, even though the current account deficit widened sharply from the previous quarter due to rising imports, data showed on Monday.
The balance of payments was boosted by strong dollar inflows. India has seen a surge in short-term dollar inflows, widely known as portfolio flows, this year as investor confidence improved after the current account gap narrowed and on expectations of a stable government led by industry-friendly Narendra Modi. He was elected prime minister in May.
The balance of payments registered a surplus of $11.2 billion during April-June, up from $7.1 billion in the January-March quarter, data from the Reserve Bank of India (RBI) showed.
A year ago the balance of payments was $300 million in deficit.
The current account deficit for April-June stood at $7.8 billion, sharply higher than $1.3 billion in January-March but narrowing from $21.8 billion a year ago, according to the RBI data.
"It is hard to say how much the non-oil, non-gold imports will go up once recovery picks up," said Indranil Pan, chief economist at Kotak Mahindra Bank.
"Also global risk aversions could put pressure on these portfolio inflows which are fickle in nature. So overall one has to have a relative caution on the current account deficit."
Foreign portfolio inflows into India have totalled $30 billion so far this year, compared with just $12 billion for the whole of 2013 when the Indian currency had plunged to a record low on concerns about the wide current account deficit and sluggish economic growth.
In the April-June quarter of 2014, portfolio inflows stood at $12.4 billion compared with an outflow of $200 million a year ago.
India's current account deficit touched a record high of around $88 billion in 2012/13, driven by a massive surge in gold imports.
Gold imports rose to $7 billion in the April-June period of 2014, from $5.3 billion in the previous quarter, but were less than half imports totalling $16.5 billion in the June quarter a year ago.
The trade deficit in the April-June period widened to $34.6 billion, from $30.7 billion a quarter ago but was still sharply lower than $50.5 billion in the same quarter of last year.
(Reuters)
Tags assigned to this article:
news 7 trade forex balance of payments