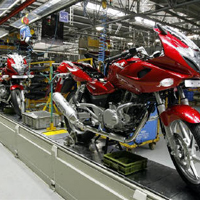 Japan's Honda Motor Co and Yamaha Motor Co Ltd have been riding on their sporty models and global brand recognition to win share from local companies in a market where two-wheelers account for the majority of passenger vehicles.

Honda's two-wheeler sales soared 30 percent in the fiscal year 2012-13 that ended in March, compared with a 2 percent fall at Hero MotoCorp, the country's largest motorcycle maker, and Bajaj's 4 percent fall.

Bajaj reported a quarterly net profit of Rs 766 crore on Thursday, marginally down on the same period from a year earlier.

"Nothing is going to change in the short term ... we don't see growth in the market," Bajaj Managing Director Rajiv Bajaj told CNBC-TV18 television channel.

Honda recently became the country's No.2 player in the two-wheeled vehicle market that includes scooters, expanding its sales network and introducing entry-level bikes. Bajaj does not make scooters.

"India is a geography of interest to any serious global player," said Ashvin Shetty, an analyst with Mumbai-based Ambit Capital. "Indian companies, especially Hero MotoCorp, appear susceptible to losing market share in domestic motorcycles to foreign players at least for the next year."

Sales of motorcycles in India were flat in the just ended financial year as hikes in fuel prices and subdued economic growth dampened demand, but are forecast to rise between 6 and 8 percent in the current year, according to an industry body.

Some analysts expect Bajaj to fare better than Hero thanks to its tie up with Japan's Kawasaki Heavy Industries. It is also owns a 47 percent stake in Austrian motorcycle company KTM AG.

On the other hand, Hero MotoCorp has invested heavily in its design and technology divisions.

Shares in Bajaj have fallen about 15 percent so far this year, while Hero MotoCorp's shares have lost a little more than 10 per cent.