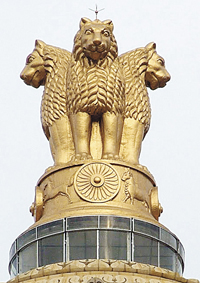 08 November, 2014
Print this article Font size -16+
In an apparent bid to shield the previous NDA government in Laxmi Vilas Palace Hotel disinvestment probe, CBI on Saturday (06 September) said the inter-ministerial group headed by Pradeep Baijal had allegedly "misled" the Cabinet Committee on disinvestment which included the then minister Arun Shourie.

In a statement defending the agency following criticism from BJP leaders on the matter, CBI spokesperson Kanchan Prasad on Saturday said, "Pradeep Baijal headed the IMG that was nodal agency for implementation (of decision of disinvestment) and Cabinet Committee on Disinvestment was miguided by the IMG about the implementation process."

The Cabinet Committee was chaired by then Prime Minister Atal Bihari Vajpayee and comprised of senior Cabinet Ministers along with Shourie who was the Minister of Disinvestment.

One of the functions of the Committee was to decide the final pricing of the transaction and the strategic partner in case of strategic sales.

The Inter-Ministerial Group chaired by Baijal, who was Secretary, Disinvestment, comprised of officers of Finance Ministry, Department of Public Enterprises, Administrative Ministry and the CMD of concerned Public Sector Enterprise.

The group had to implement disinvestment decisions, including appointment of advisors, pricing of shares, and other terms and conditions of disinvestment.

"The valuer appointed by ITDC, which owned the heritage hotel, was changed by IMG," Prasad said.

CBI has alleged that five-star Laxmi Vilas Palace ITDC hotel spread on 29 acres of prime property in Udaipur worth Rs 151 crore was sold to Bharat Hotels at an undervalued price of Rs 7.5 crore in 2002.

Prasad said, "CBI is investigating the malafide in the said implementation of the decision of disinvestment by the Government of India by the concerned officials."

"CBI is not looking at the decision of disinvestment as a policy. While implementing the disinvestment decision of Government of India regarding Laxmi Vilas Palace Hotel the evaluation was not done properly and there were apparent malafide in the implementation process," she said.

On the criticism by Finance Minister Arun Jaitely for filing FIR on a disinvestment decision which is more than a decade old, CBI spokesperson said, "Howsoever old it may be, it remains a criminality and can be decided only by a court and no one else."

"It has been traditional practice to register cases on the basis of source information as prescribed in CBI Crime Manual, 2005 that has been acknowledged by the Constitutional Courts," she said.

Those named in the FIR include Baijal, who was then Secretary Disinvestment, Ashish Guha, the then Managing Director of Lazard India, Kantilal Karamsey Vikamsey, owner of Kanti Karamsey and company and authorised representative of Bharat Hotel which owns Hotel Lalit.

"It was alleged that during the period 2001-02, Laxmi Vilas Palace Hotel, Udaipur, a heritage hotel and one of the units of Indian Tourism Development Corporation (ITDC), Department of Tourism...with 54 rooms with all accessories was first drastically undervalued and then sold/disinvested to a private hotel situated at Barakhamba Road, New Delhi, at a price of Rs 7.52 crore," Prasad said.

She said as per the then DLC rates of land in which the hotel was situated was allegedly Rs 151 crores (approx) and in this way, a loss of Rs 143.48 crores (approx) was caused to the ITDC.

The agency has also mentioned unnamed government officers and private persons in the FIR registered under IPC sections related to criminal conspiracy and cheating besides under the Prevention of Corruption Act.