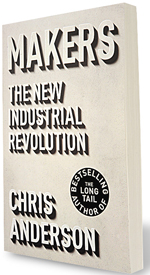 08 November, 2014
Print this article Font size -16+
In Star Trek: The Next Generation, Captain Picard commands the Enterprise Replicator to make “Tea. Earl Gray. Hot” and pop comes the hot beverage. This was a sci-fi movie with tonnes of similarly fascinating gadgets that looked unbelievable, but in Makers, Chris Anderson brings in similar elements of surprise. He makes a strong argument about how digital fabrication is going to aid desktop factories in the near future and how it can bring many such gadgets to life. Anderson is the editor-in-chief of Wired, co-founder of 3D Robotics and DIY Drones web communities and the author of best-sellers such as The Long Tail and Free: How Today’s Smartest Businesses Profit by Giving Something for Nothing. His new book is all about the new wave of innovation and instant-entrepreneurship using various digital tools.

The author hails the importance of ‘doing’ or ‘making’ as the most important catalyst and claims the ‘garage-culture’ is going to lead us to a new world of innovation and great products. Calling the ‘maker movement’ an ‘industrial revolution’ does sound exaggerated at a cursory glance, but the author has done a fine job by describing the various innovations in 3D printing, digitally-controlled milling machines and laser cutters that are going to be important tools for rapid prototyping and manufacturing.

The author sees the Third Industrial Revolution as one where digital manufacturing aids personal manufacturing, and calls for the industrialisation of the maker movement. His excitement is felt all over the book as he starts off with his experiences of seeing his grandfather work in his garage, and until now where he works with people from across the globe for DIY Drones.

Today, the Web is increasingly becoming a part of our life, and the networking cable is the conveyor belt of the digital world. The cycles from ideas to entrepreneurship have reduced drastically as Web-centric and open-innovation models have led to increased collaboration between people in a geography-agnostic world.

Anderson cites the example of initiatives such as KickStarters, where innovators can post their ideas even before they produce the prototype and get funding and also get a feel of the possible adoption rates. There are no barriers to variety, and digital tools have helped customise products even when they are mass-produced. Especially, says Anderson citing the example of 3D printer, this has led to individualisation and customisation and goes on to a state where buying a 3D printer is similar to buying a front-row seat to a cultural transformation. The author’s hyper-focus on 3D printers makes it sound as good as the Enterprise Replicator in Star Trek, but we, as readers, should not get carried away, as the technology is still in its infancy.

The flowing felicity of writing makes this book extremely easy to read; one can knock it off in a few hours. That said, there are a few disappointments too. One, is the lacklustre and uninspiring cover, and the other, the lack of stories citing failures in the maker movement. Entrepreneurship has not always been about serendipity and rapid-prototyping, and it would have been great if Anderson had cited cases wherein many millions of dollars were spent with no product being delivered. The book does not spur any questions, but during the course of the read, catalogues the desirable products in the Maker’s wish-list.

Anderson makes innovation sound easy for someone who has all the right tools, and, hence, loses focus from the rigorous process that has to be followed during any product design and development. He does not unravel the mysteries of entrepreneurship either. Also, the author does not brainstorm on possible intellectual property issues that will arise with digital fabrication technologies. Custom-made coffee mugs or t-shirts are easy, but will the larger population opt for other critical things made via a Replicator?

Venkatraman works with an IT company in Bangalore