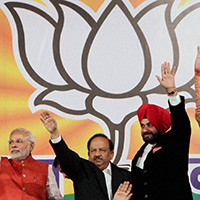 08 November, 2014
Print this article Font size -16+
India's opposition Bharatiya Janata Party was set to make gains in two big states in the south and east that began voting on Thursday in the sixth phase of a mammoth general election that could help it build a stable majority in parliament.

A final set of opinion polls predicted a strong showing by the BJP and its allies in Tamil Nadu in the south and West Bengal in the east that could make it less dependent on the two women who rule those states and who have in the past proved to be fickle coalition partners.

The Hindu nationalist-led opposition, led by prime ministerial candidate Narendra Modi, is riding a wave of public anger across India against the ruling Congress party over a slew of corruption scandals and a slowing economy.

A little over 180 million people were registered to vote on Thursday in the sixth phase of the world's biggest election that will end on May 16 when votes are counted from across India.

While Modi has focused on development issues, some of his colleagues on the Hindu far right have sought to rake up divisive issues that rivals say is aimed at polarising voters in the BJP's northern and western bastions.

His party is also looking to make a dent in the south and east to pull off an outright majority, something that no party has been able to achieve in nearly two decades.

"This election we are expecting a significant contribution from the south," said former BJP president Venkaiah Naidu, adding that the party wanted to lift its southern tally to 50 seats from 19 in the last election in 2009.

A regional party led by Jayaram Jayalalitha, the powerful chief minister of Tamil Nadu, is expected to win the most seats, but not enough to sweep the state as Modi's aggressive campaign for an all-out majority makes inroads, polls by India Today-Cicero and CNN-IBN said this month.

In West Bengal, a third of voters picked Modi as their first choice for prime minister ahead of state chief minister Mamata Banerjee, who leads a regional group. Her party is expected to win the most seats at stake in the state.

Banerjee was an ally of the ruling Congress coalition until late 2012, when she walked out in protest against its decision to allow foreign supermarket chains into India's $500 billion market.

Both Jayalalitha and Banerjee are seen as belonging to parties to which Modi could turn in case he falls short of a majority in the national vote.

However, both are likely to extract their pound of flesh. In Banerjee's case, her left-leaning policies may run counter to Modi's reformist instincts.

"We are trying to get a majority of our own. Otherwise, we will have to take the support of the regional parties and the day-to-day running of government will not be trouble-free," said BJP general secretary J.P. Nadda.

Banerjee forced Indian giant Tata Motors to shift the plant for the world's cheapest car from West Bengal to the western state of Gujarat, which Modi governs, after violent protests over land acquisition.

A voter in India's financial capital Mumbai, which also went to the polls on Thursday, said the election was a chance to stop India's slide and restore economic momentum.

"It's important for this city to vote for a party that is business and development friendly, and that matters over and above anything else," said Riddham Gaba, a 32-year-old businessman.