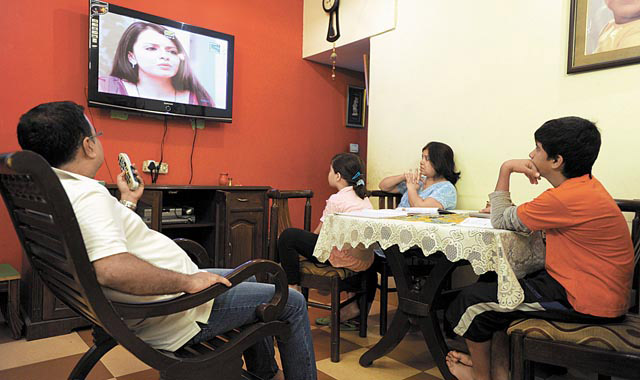 
TAM Media, the television audience measurement company that has been dominating the market for over a decade and a half, has finally blinked. After initially attempting to take on the recently set up Broadcast Audience Research Council (BARC), it has now agreed to merge its network of Peoplemeter panels to BARC, and exit the TV eyeball monitoring game.
In a formal statement BARC India, set up by broadcasters, advertising agencies and advertisers, said it was forming a new meter management company along with TAM India, to merge the meters of the two groups. The company will run the meter operations and will supply raw data to BARC India. “Meters will be deployed based on BARC’s sample design and the ratings will be computed and disseminated through BARC India’s software,” the statement added.
TAM Media, a joint venture set up by two media giants – Kantar Media and A C Nielsen – had been the dominant player in the television ratings business since 2002 when it gobbled up a domestic ratings agency called INTAM, promoted by ORG-Marg chairman Titoo Ahluwalia.
In the interim years, there have been challengers to TAM Media, but none could stay on as they could not garner sufficient number of subscribers. However, over a decade, television networks and other stake holders had steadily voiced their concern at TAM Media’s lack of sufficient sample size – sometimes less than 5,000 homes – that produced skewed data. Since eyeballs measurement was the predominant basis on which advertising agencies, on behalf of their advertiser clients, parked their money, the voices of dissent grew over the years.
The television advertisement market that sustains TV networks is worth nearly Rs 18,000 crore, and almost 80 percent of the revenue generated by TV companies is from advertisements. Faulty viewership data thus has a debilitating effect on the revenue flow of these companies.
To correct this scenario, the various stakeholders – the broadcasters, advertisers and ad agencies – came together around 3 years ago to launch an industry initiative – BARC India – that vowed to seed a large sample size of audience measurement meters, and provide robust data to the industry. BARC India formally launched its own data services about 6 months ago. Initially, TAM Media, thought it would ride out the competition. However, since most of the subscribers – the TV channels and the ad agencies – were participants in BARC, they discontinued their TAM subscriptions. Ultimately, the older agency, starved of subscription revenue, had to throw in the towel.
This was expected as was predicted in older columns by the writer. In a tight market of few players, it is difficult for two measurement currencies to coexist. This was proved when, after years of competition between TAM Media and ORG-Marg’s INTAM rating system, the latter has to give way to TAM, who then clearly was the one with better resources. More than a decade later, the cycle of life has turned a full circle, with TAM Media now giving way to BARC India, the one with greater industry support.
“This ratings data will be the sole trading currency for the country, giving advertisers, broadcasters and agencies accurate and quality measurement,” the new victor BARC India said in its statement.
The new meter company being formed will hold the meter assets and panel management operations of the present BARC India and TAM India panels. These will be jointly owned by BARC India, Nielsen and Kantar with management control resting with BARC India.
BARC claimed the meter measurement company will have 34,000 meters pan-India, and it will supply raw data to BARC, which will use its own statistical processes and sampling design.
Meanwhile, TAM India will continue to exist and provide its non-TV ratings services. These include AdEx - Advertising Expenditure for TV, Print, and Radio; RAM - Radio Audience Measurement; Eikona, a PR Audit service; and TAM Sports Measurement and S-Group Consulting.
Punit Goenka, Chairman of BARC India said: “This partnership is a big step forward. The technology and methodological prowess of BARC combined with the extra meters and the field force will definitely help the industry progress.”
For TAM Media’s two promoters, Kantar and A C Nielsen, they are happy to atleast hang on to the Indian market albeit as junior partners. Says Eric Salama, CEO of Kantar: “We are happy to cooperate with BARC India to be able to provide clarity and a large single sample for the industry and to keep India as a key market for us.”
[email protected]
Twitter: @gurbir110
Tags assigned to this article:
BARC India tam tv audience measurement agency gurbir singh