New Delhi [India], August 3 (ANI): Actor Ayushmann Khurrana who is known for his poetry skills marked the special occasion of Raksha Bandhan by penning down a poem on the need to make the world more secure for sisters.
The poem spoke about making the world so secure for women that they do not have to depend on their brothers to feel protected.
Khurrana took to Instagram to share his vision through the poem, in which he is seen talking about equality, inclusivity and parity for women. 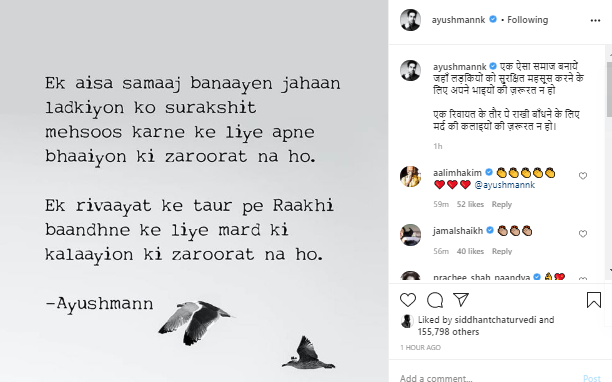 "Ek aisa samaaj banayein jahaan ladkiyo ko surakshit mehsoos karne ke liye apne bhaaiyo ki zaroorat na ho, eik rivaayat ke taur pe rakhi bandhne ke liye mard ki kalaaio ki zaroorat na ho," he wrote.
Translated in English, this poem highlights Ayushmann's wish that all Indians should actively work towards creating a society, in which a girl does not have to depend on her brother for her protection or to feel safe in public.
He also hoped that Rakhi, as a custom, will change into becoming a symbol of progressiveness that will hopefully see a girl not just needing a man's hand to tie the totem of love on this day.
The festival of Raksha Bandhan is observed to celebrate the special bond between brothers and sisters. (ANI)