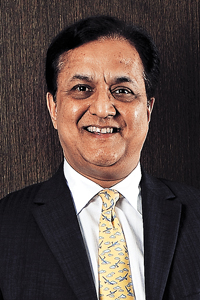 08 November, 2014
Print this article Font size -16+
He likes to think of his institution as the "Professionals Bank of India". It's a description that could be applied to its personnel, clientele, or even its approach to providing financial services; Rana Kapoor, managing director and CEO of Yes Bank, is a little enigmatic about the exact application of the term, saying it applies to all.

But this much is true: on a three-year, compounded annual growth rate (CAGR) basis, he comes in as the second most ‘value-able' CEO among mid-sized companies in this year's survey of Most Value-able CEOs. That's no mean achievement, especially when you create and head an institution that is just six years old.

Yes Bank's performance has been consistent under his stewardship, winning a number of awards, attracting a wide variety of institutions and agencies as investors from among Europe and Asia — from Rabobank in the Netherlands, his old alma mater to Orient Global Cinnamon Capital Pte in Singapore. He himself has been the recipient of several awards.

The 2008 global financial crisis came as a shocker; for a young institution growing at 75 per cent year-on-year for the first three years, it was more than a rude one. "But it also presented opportunity in adversity," says Kapoor. "So we de-risked the balance sheet, diversified revenue streams, upgraded systems and controls apart from implementing cost effectiveness."

Post crisis — which was about a year or so later — he shifted gears and strategy. Now the mantra became his version of carpe diem: seize the (opportunity every) day, which also include streamlining the lending to entrepreneurial class, something that was always on Yes Bank's agenda. Second, the crisis was a chance to go out and get some good talent at a great price, which Kapoor's HR team did. Third, he invested ‘meaningfully' in his brand through various institutional and non-institutional channels. He credits his management team for a lot of the progress. "If they do well, I can go out and do some things that I haven't been able to for a long time," says Kapoor.

To that end, he outlines his new strategy, one that he waxes eloquent about at every opportunity he gets: Yes Bank version 2.0. In many ways, it's a bigger, better and perhaps brassier version. Here's how the numbers stack up: by 2015, a CAGR in profits of 35 per cent, a balance sheet with Rs 1,25,000 crore in deposits, Rs 1,00,000 crore in loans, a net interest margin of 4 per cent and a return on equity of 22-24 per cent.

He also plans to increase the number of branches to 750 from 250, and ATMs to 2,500, his capital adequacy at 19 per cent is already among the highest, and Yes Bank has an international credit rating that is equivalent to India's sovereign rating. It's an  agenda that is ambitious in scope and size; his investors have been happy with what he has done, and may well say YES! to.