Attributes Of A Wise Leader 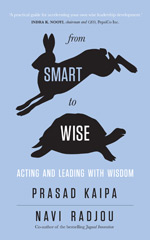 08 November, 2014
Print this article Font size -16+
Wise leaders know when to lead and when to let others do so—and they never get caught up in any role they choose to assume, as we see next in the case of N.R. Narayana Murthy of Infosys.

Murthy, co-founder of the Indian software service provider Infosys, is a widely admired business leader in India. He is in fact an exemplary wise leader in his actions and words. Murthy believes that leaders must put the priorities of their team members, customers, and employees ahead of their own and serve them with humility as servant leaders. He also believes that leaders are part of a bigger society and have responsibilities that extend beyond their day-to-day role in their organization to serve a larger purpose. Murthy demonstrated this role clarity and commitment to the concept of a noble purpose throughout his own career.

While working in France in the early 1970s, Murthy was strongly influenced by principles of socialism.12 While he was visiting communist Bulgaria on vacation, he was arrested for having talked to a girl in French. He was locked up without food and water for ninety-six hours and charged with espionage. Bulgarian authorities told him later that he was released because he was from India, which was considered a friendly country. Murthy shuddered to think what would have happened to him if he had not been from a friendly country. That incident disillusioned him with communism as a political system, although the socialist economic principle of sharing one’s wealth with society continued to resonate with him. Realizing that he was ‘a capitalist in mind, [but] a socialist at heart,’ he went on to start Infosys in 1981, describing his company as an ‘experiment in entrepreneurship to create wealth legally.’13 It was Murthy’s socialist belief in the distribution of wealth that made Infosys one of the first Indian companies to offer employees stock option plans and helped create thousands of millionaires when Infosys went public in 1991.

Over the years, Murthy diligently groomed and mentored future leaders at Infosys. He was also known for delegating power and giving credit to others whenever appropriate. Rather than clinging to his CEO role, he voluntarily stepped down from his position in 2002 (when he turned fifty-six years old) and became Infosys’s chairman, a role that he relinquished in 2011 when he turned sixty-five. Since 2002, Infosys has had an orderly transition of power at the CEO level.
Despite being a billionaire, Murthy maintains a frugal lifestyle: he has lived in the same two-bedroom house in Bangalore for decades. Murthy and his Infosys co-founders walk or use scooters for short distances instead of cars. They take short showers to save water. After a number of kidnappings of prominent businessmen in India, the police top brass who manage security in India offered Murthy protection, but he declined, saying he didn’t want to annoy his neighbours and block traffic. He has given away tens of millions of dollars to charities, which is in line with his concept of ‘compassionate capitalism’.14

When Infosys became the first software company in India in 1999 to receive the highest level of capability maturity model (CMM level 5) certification from Carnegie Mellon University, Murthy did something unusual: he decided to share the company’s experience of the certification process with all its Indian competitors.15 Murthy believed that by helping his rivals receive certification at the same level, the entire Indian information technology (IT) services sector would become globally competitive and attract more investments from multinationals, and that in turn would also benefit Infosys. It was clear to Murthy that letting other Indian companies excel would lead Western companies to pay attention to India—a country that in the 1990s hadn’t yet made its mark in the global IT outsourcing sector—and by so doing would help increase the overall Indian market share and not just Infosys. India is now a prominent player in the global IT market.

Although he co-founded Infosys, Murthy led his company as if he were a trustee—an individual who holds or manages assets for the benefi t of Infosys customers, partners, employees, and shareholders. Recognizing that the role of trustee is that of a short-lived caretaker, Infosys has given away stock options worth Rs 540 billion to employees. ‘Every Indian employee at all levels of the company joined on or before March 2010 is a stock holder of Infosys,’ Murthy wrote in the company’s annual report for 2010–2011. With these steps, he has helped over two thousand Infosys employees become millionaires.

Wise leaders like Murthy are willing to cede their power voluntarily. They are not caught up in their role and the power that usually comes with that position. Seeing himself as a trustee, Murthy had no qualms about letting go of his position and in fact saw it as part of his duty to ensure a smooth and well-considered transition. Kris Gopalakrishnan, another co-founder and current co-chairman of Infosys, told us that when Murthy was CEO, all of his senior executives had an equal voice.16 Murthy encouraged debate and listened to multiple perspectives before making a decision. When he was chairman, he might argue with the CEO about a decision, but he enthusiastically supported whatever decision the CEO made in the end. Murthy felt that as a senior steward of the organization, he should fully support others in leadership roles. He consistently demonstrated simplicity and humility by maintaining a low profile without letting money and success go to his head. He also knew how to play a larger role in his industry and in Indian society.

From chapter 'Gain Role Clarity' from the book From Smart to Wise: Acting and Leading with Wisdom by Prasad Kaipa and Navi Radjou. Extracted with permission from Random House India

Read: Interview with the authors Prasad Kaipa and Navi Radjou