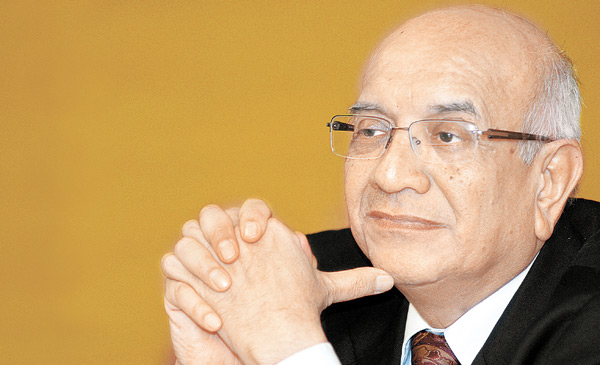 08 November, 2014
Print this article Font size -16+
In 2002, when Kiran Karnik was at the helm of Nasscom (National Association of Software and Services Companies), the organisation was ripe with talk of defection. Over a dozen small companies wanted to quit and form an alternative association that would better represent their interests. While these small IT firms were not critical to Nasscom’s larger scheme of things, if they had indeed walked out, Nasscom’s claim of representing all of the Indian IT industry would fall flat.

The smaller companies felt Nasscom did not care about or cater to their interests. Its executive council (EC) members were almost all representatives of bigger companies, given the system of weighted voting that decided the constitution of the governing body. Karnik, the then chairman of Nasscom, was quick to recognise the discontent. He commissioned a survey. The objective was to figure out how the composition of the EC would change if the voting was changed to one-member-one-vote system. “The results surprised us. With the change in voting pattern, the EC composition would remain pretty much the same,” says Karnik. Only one member would have been replaced, and the replacement would still be from the same company. The only change would have been the candidate himself, he explains. The potential defectors stayed on, and a crisis was averted.

This is just one of the several instances where the IT industry’s apex representative has had to deal with criticism about pandering to just the big boys of the industry.

Eight years since, Nasscom is at a crossroads again. The Big Five — Tata Consultancy Services, Infosys, Wipro, Cognizant and HCL Technologies — have grown so big that they do not really need Nasscom anymore. But the irony is that Nasscom is still considered a ‘Big Boys’ Club’. The five biggest companies by way of revenues contribute the maximum resources to the association, and get most of its attention in return.

“The issue is that even today 95 per cent of Nasscom members are organisations with revenues between $3 million and $5 million,” says Kalyan Kar, managing director of Inthink, a small software company based out of Kolkata, and vice-president of Sector-V Association, a body looking out for the interests of companies in the IT sector in Kolkata.

Ask Som Mittal, Nasscom’s current president, and predecessor Karnik, and the view — partly justified — is that 70 per cent of Nasscom’s work benefits the entire industry.

Others like Quatrro chairman, and Nasscom EC member, Raman Roy argue that the reality is more complicated. Nasscom’s strength comes from its access to data, says Roy. So, if all the data comes from the bigger companies, who can compile and manage their resources, their opinions automatically get more importance. “Even I, as a smaller company, do not have the resources to devote to Nasscom that a TCS or Infosys would have,” says Roy.

On the other hand, the smaller IT players have had to fend for themselves for so long that they do not trust the association. “While Nasscom has done good work for the entire industry, I do not think being a spokesperson for the smaller players is a job that it has done too well,” says Inthink’s Kar.

Waning Influence
One opinion is that Nasscom has done more to nurture the Indian IT industry than anyone else. In 1992, when the association was founded by Dewang Mehta, the IT industry was not even worth $10 million. At that time, Nasscom got the government to create Software Technology Parks of India (STPI), and give a 20-year tax holiday to units in export-oriented special economic zones (SEZ).

Cut to 2011. The size of the Indian IT industry has burgeoned to over $100 billion. From employing a few thousand in the early 1990s, it now employs close to 2 million people. But battling a widening fiscal deficit, the government has decided to cut subsidies, and is not willing to extend the tax holiday to SEZ units by even a year. Nasscom tried but failed here. “The macro environment has changed and if the government believes that there are other industries that deserve the support of the government, then we have to respect that,” says Mittal.

Many are not satisfied with this explanation. “If the government was giving the tax holiday to other industries, it would be okay. But that is not happening. There seems to be a perception that the industry has grown all it could. That is not true. New companies still need support,” says Faisal Hussain, CEO of Synechron, a $150-million company in the banking, financial services and insurance (BFSI) segment that derives over 90 per cent of its revenues from the US.

Four industry veterans, speaking off the record, felt that while Nasscom was still needed for a united front when talking to the US government, it was not very useful in dealing with the Indian central and state governments. “The issues facing the industry are land and talent. Land is a state subject, and Nasscom has zero influence with state governments. We lobby and deal with these governments directly,” says a former senior Wipro executive.

Mittal’s rationale for Nasscom staying away from regional centres is clear: “Ninety per cent of India’s IT work is done in the top seven cities. Why then waste resources elsewhere?”

Ganesh Natarajan, vice-president of Zensar, a mid-level, Pune-based IT company, and chairman of the Confederation of Indian Industry’s (CII) IT committee, counters: “Nasscom has become too centralised. It needs to evolve into a more federal structure, especially since the industry’s growth will come from smaller towns.”

Alok Bharadwaj, president of the Manufacturers Association for IT, which represents the computer hardware, training and software industries, says the problem lies in Nasscom’s inability to work with governments and create an enabling environment when the going is slow. “They have done well when the environment was congenial, but things aren’t as rosy as they were. India is already established on the global map. It is not just about aiding companies; it is about drilling the virtues of outsourcing deeper,” says Bhardwaj.
break-page-break
In A Borderless World
Even as its role is being questioned in the domestic market, industry associations in the developing market treat Nasscom as a benchmark. Newer IT associations formed in Brazil and Ghana have been christened ‘Brasscom’ and ‘Gasscom’, says Mittal.

Here, too, Nasscom has not been quick to change tack. Jaideep Mehta, country manager of IDC, says the labour cost arbitrage used in developed markets will not work in developing markets. “New things like non-linear growth models and platform-based models will come into play here because IT companies will have to innovate given that labour is cheap here.”

India, however, continues to bank on Nasscom for a comprehensive external policy. “It is taken for granted that any committee for policy-making on external trade relations will have Nasscom representation,” adds Mittal.

The association, which has grown from 25 to 2,000 members, managed to establish itself as the sole industry-specific body, leaving behind other apex bodies such as the Federation of Indian Chambers of Commerce and Industry (Ficci) and CII. “There is no parallel body representative of an industry comparable to Nasscom,” says Roy of Quatrro.

Techniques of lobbying were also picked up and perfected along the way. According to Karnik, when protectionism was at a peak after the US economic slowdown, Nasscom used American companies to get its message across to Congressmen. “We would meet senators separately, and then we got the Microsofts and the IBMs on our side because we figured that the only way the Americans would listen to us was if the message came from Americans themselves,” he explains.

But, of late, such engagement has reduced. Africa, Japan and Europe have taken precedence in the agenda even though the industry still gets over 75 per cent of its business from the US. “Most companies now have offices in the US. We deal with the government and the senators directly,” says the ex-Wipro executive.

Nasscom has also not been able to stop the process of getting an L1 visa from getting longer. While quotas for H1B visas remain the same, it has become costlier to get one.

In addition, local associations have cropped up, limiting Nasscom’s influence. “While Nasscom exists for national software and IT industries, there are several others, like channel partners, which had no representation. This is where we step in,” says B. Hari, president of the Computer Association of Eastern India, a Kolkata-based IT association.

Within the country, in a macro environment where the central government is increasingly apathetic to handholding the IT industry, and local issues of land and talent dominate boardroom discussions, local associations have not just filled a vacuum but come to occupy a potential area of Nasscom influence.

What Next?
Nasscom has tried to address some of the issues. When the threat of a splinter group representing intellectual property-driven companies loomed large, Nasscom formed the ‘Emerge’ chapter in 2003, to give voice to smaller companies and their specific requirements such as extension of the STPI scheme. But it has not yet delivered on the promise. “Nasscom has to help in creating an ecosystem for entrepreneurship. That isn’t happening,” says Kar of Inthink.

Last year, Nasscom launched a scheme under which 150 companies’ employees were brought under the association’s umbrella for a combined insurance cover. Other steps that Nasscom has taken to fight the ‘big boys’ association’ tag include an incubation scheme for new companies, a specific forum for new Internet and e-commerce models, and a gaming forum.

Deep Kalra, founder of MakeMyTrip.com, and a member of the Nasscom EC, heads the forum for new Internet companies. “We got the taxation issues sorted with the Reserve Bank of India almost on our own a couple of months ago. The mentorship programme for new companies will start bearing fruit (soon),” says Kalra.

Such steps, however, may not be enough. Even its most ardent admirers admit that the association needs new strategies for the fast-changing dynamics of domestic and global markets. Nasscom now represents a far larger base of members and has to grapple with issues such as taxation, image management and visas which continue to haunt the industry. As Roy says: “The issue now is that we are too operational. A 10-year game plan is absent.”