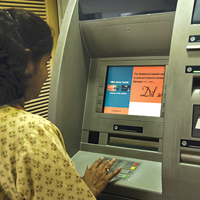 08 November, 2014
Print this article Font size -16+
Asian central banks are expected to adopt divergent strategies to protect their economies against weaker growth and scary foreign capital outflows as they hold policy reviews amid a sea-change in international markets.

For much of Asia, the prospect of the US Federal Reserve winding down its easy money policies has removed the headache of asset-inflating inflows, though the speed at which funds have pulled out has created a whole new set of worries for some.

Central banks in Indonesia and India, which rely on foreign capital to fund current account deficits and are therefore more vulnerable to portfolio outflows, have been forced to intervene in the market to defend their weakening currencies.

Bank Indonesia is expected to hike its benchmark policy rate for a second consecutive month at a policy review on Thursday, and could announce surprise measures to counter surging inflation, a declining rupiah currency and falling foreign exchange reserves.

"The limelight is certainly on Bank Indonesia (BI), especially following the recent comment that they have a mix of policies in their toolbox to cope with the recent spike in inflationary pressures," said Gundy Cahyadi, economist at OCBC in Singapore.

But for other Asian central banks, the situation is not as dire as capital outflows and inflation remain manageable.

They are unlikely to immediately tighten broadly easy policy settings in response to the changing Fed outlook.

Thailand's central bank on Wednesday kept its policy rate unchanged at 2.50 per cent as expected, after a recent cut to support growth and curb capital inflows.

Malaysia and South Korea were expected also to hold policy rates steady when their monetary policy committees meet on Thursday.

"Asian central banks are generally mercantilist and will pick a weaker currency and higher growth," said Sean Yokota, head of Asian strategy at SEB. "The pace (of a currency's decline) may be open to debate, but the direction is fine with them."

In Indonesia, however, Yokoto noted that inflation was likely to head above 8 per cent by year-end. Even if that was not sustained, he said, interest rates at 6 per cent and 5-year government bond yields at 6.7 per cent were too low.

Indeed, Bank Indonesia last month became the first Asian central bank to hike its benchmark rate since 2011, and was widely expected to follow with another 25-basis-point move to 6.25 per cent on Thursday.

"Countries that run current account deficits tend to be more vulnerable because of the pressure in the balance of payments. As a whole though, external liquidity risk in the region remains manageable at least for now," Cahyadi said.

Big Tool Kit
Beyond raising its benchmark rate, BI could also hike its overnight deposit facility rate (FASBI) after the central bank indicated it would "strengthen its policy mix" at this week's meeting, analysts said.

BI has also hinted it could soon introduce measures like tradable term deposits and an auction market in foreign exchange swaps to stem the flow of foreign funds.

Analysts believe Indonesia should also introduce macroprudential measures such as a holding period for exporters' profits to slow declining foreign exchange reserves, which dropped to a two-year low of $98.1 billion in June.

Indonesian policymakers were not alone in reviewing their full range of tools in the face of the biggest inflection point for investors since 2008.

India's regulators on Monday toughened rules for derivatives trading in the currency market in a bid to arrest the steep decline of the rupee, which fell to a record low against the dollar this week and is emerging Asia's worst performer this year.