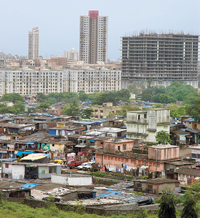 08 November, 2014
Print this article Font size -16+
On a particularly wet day this monsoon, boulders from a hill at Eit Bhatti, in Mumbai’s suburb of Goregaon, came crashing down on a crowded slum below. Three huts were flattened and the families took shelter in a nearby play school till the rain stopped. The displaced families then reconstructed their huts and went home ignoring the danger of another landslide. This year, fortunately no one died. In the past, such landslides have resulted in casualties on a regular basis. But there is no alternative for people living in these slums.
This grim reality has been addressed in a recent report released by Kumari Selja, Union minister for housing and urban poverty alleviation, last month. Penned by a committee headed by economics professor Amitabh Kundu from Jawaharlal Nehru University, the report, though, paints a hopeful picture.
The urban housing shortage, contrary to popular perception, dropped nearly 25 per cent from 24.7 million units estimated at the beginning of the 11th Five Year Plan in 2007 to 18.9 million units for the 2012–17 Plan. The main reason for this, Selja said, was the addition of 26 million homes over the last decade. The most impressive numbers came from the housing for the economically weaker sections, where the shortage went down to 56 per cent, from 88 per cent in 2007. However, the housing shortage for the lower-income group rose sharply from 11 per cent to 40 per cent during the same period.
The report highlights ‘housing poverty’ that goes beyond just ‘homelessness’. These numbers reflect not just those who are homeless — estimated at around 530,000 families — but also those who live in unserviceable ‘kutcha’ homes (990,000), and those in decrepit homes (2.27 million). The largest number — nearly 1.5 million families — in fact, are those who live in congested homes, i.e., several generations of families living under one roof because they don’t have the means to move to a new home.
Meanwhile, some figures, like the sharp fall in housing shortage, when the housing ministry was expecting a deficit of 26.5 million homes, suggest that there may have been some number jugglery.

‘Housing poverty’, after all, is a difficult number especially when the committee was dealing with subjective issues such as estimating what is housing ‘congestion’, or what constitutes a ‘kutcha’ dwelling. So, considering that a 2010 World Bank (WB) report estimated that India was facing a housing shortage of “20–70 million units”, the report’s official figure of a shortfall of 18.78 million homes should be taken with a pinch of salt.
Selja called upon builders and the government to increase low-cost housing stock to reduce the gap between demand and supply. Easier said than done, since builders are disinterested in low-cost housing, as it gives negligible margins and is a marketing nightmare. Both the Union and state governments have wound down their role as a developer, and consider their role more as land aggregators and facilitators. Public sector developers, such as housing boards, are virtually defunct.
The WB report had suggested that building 23–28 million low-cost homes would be “commercially viable” considering the huge demand, and making housing finance easy through workable mortgages. But who will bell the cat?