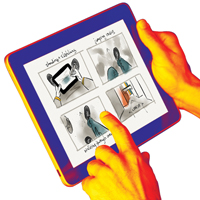 Paper
Everybody's talking about a free app called Paper. It gives you, well... paper! But it's slick and smooth and uses a touch of pinch and zoom to open and close your files, which here are called whatever you want to call them, but they're about 10 pages each.

You get, with this paper, a set of six tools. But here's the catch: these are not free. Except one rather lovely thick-and-thin drawing pen and an eraser. Oh, and a handful of colours. The remaining tools, all pen-like, are for sketching finely, drawing thick and quick diagrams, colouring in nice cloudy splotches, and making outlines. Each of these tools costs $1.99, which is not only expensive but unfair. Surely it would be better to be an upfront paid app, and not get users to pay for each separate tool. But, that said, you can get away with the free tool and, say, one more and do very well.

In Paper, you can create very quick sketches and line drawings that look very good and you can jot down ideas to share with others via email, Facebook, Twitter, or post to your Tumblr. This means each page will go out as a single image — not as a collection of pages or a file. You can make charts in a casual freehand way and use the image in your presentations.

Paper is one of those apps that has to be used for its appeal to be understood. It's best thought of as being really tablety and slick. But it could have had more choices for what it costs after you buy all the tools. Should you be interested, this app is for the iPad and is not to be confused with another app by the same name but not by the same developer, 53. The other Paper is just a whiteboard.

Snapguide
There's another social network in the making. And this one is useful. For now, it's a free app for the iPhone, though it looks just fine on the iPad. Think of Snapguide as the Instagram of how-tos. The app is a nice and easy platform to create guides on anything at all, on the go. You can take pictures or videos, write out simple steps and you can have a guide ready to go up on the network within minutes. Just as with Instagram, you can follow people. And everything else that people can think of, from origami to five ways to tie a scarf. It's very new on the block and so there aren't a huge number of guides yet. It'll be interesting to see if this idea gains traction with businesses or becomes as addictive as Pinterest and Instagram.

Anti-Spam SMS Pro
An Android phone app blocks all those annoying unsolicited messages trying to sell you real estate on Sunday afternoons, and all other afternoons for that matter, flouting Trai rules and getting past your provider's DND filters. It doesn't stop calls, but allows you to put numbers in a blacklist to block them. There are also some bulk actions you can take such as blocking messages from all numbers not in your contact list. Too bad if a spammer uses multiple numbers. You can select numbers from among your contacts and call logs to blacklist. Also, you can enter a bunch of keywords to block. ‘Apartments' could take care of a lot of your nuisance messages. One tap can turn the app's functioning off in case you do want to receive all SMSs.