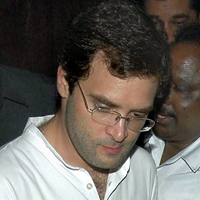 08 November, 2014
Print this article Font size -16+
In a major setback to Congress vice-president Rahul Gandhi, the Union Cabinet on Sunday (2 March) night rejected the ordinance route for a set of anti-corruption measures.

The Union Cabinet, which met in Delhi this evening, discussed the issue of these ordinances but it was felt that "full deliberations" are required in Parliament keeping with the "highest traditions of democratic principles", Information and Broadcasting Minister Manish Tewari told reporters.

This was the second time in three days that the Cabinet decided against using the ordinance route on certain measures, which were being pushed by Rahul Gandhi as part of a "framework" to fight corruption.

This decision is believed to have been influenced by the apprehension that President Pranab Mukherjee would not give assent to these. Senior ministers like Law Minister Kapil Sibal and Home Minister Sushilkumar Shinde met the President at least twice since yesterday, apparently to gauge his mood but evidently did not get any positive signal.

Sources said the Congress Core Group, headed by Sonia Gandhi, had yesterday given its assent to using the ordinance route to measures like Prevention of Corruption Act, Citizens' Right to Time-bound Delivery of Services and Citizens Charter Bill, SC/ST (Prevention of Atrocities) Amendment Bill and Rights of Persons with Disability Bill. .

The Cabinet also cleared Central reservation for the Jat community. With this the community now gets reservation in government jobs and educational institutions.

Rahul Gandhi had pressed for passing six anti-corruption bills in the just-concluded Winter Session in Parliament, which was marred by protests over the Telangana bill.

Of them, only the Whistleblowers Protection Bill was passed in Rajya Sabha on the last day on February 21. Thereafter, Gandhi had indicated that ordinances could be issued on anti-graft bills which could not be passed in Parliament.

According to the Prevention of Corruption Act (Amendment) Bill, an investigating agency will have to seek prior permission from the government before questioning a retired bureaucrat in a corruption case.

The provisions aimed at protecting retired bureaucrats will come into effect only after Parliament gives its nod to the changes in the Prevention of Corruption Act (Amendment) Bill, 1988.

At present, there is no legal provision for investigating agencies to seek prior permissions to quiz a former government employee. .

The amended anti-graft bill fixes a time-frame of three months for the government to decide on a probe agency's request seeking sanction for prosecution against government officials.

An additional one month may also be given in case the government needs to consult the Attorney General or the Advocate General.

The Right of Citizens for Time-Bound Delivery of Goods and Services and Redressal of their Grievances Bill seeks to promote transparency and accountability in the government's delivery systems for its citizens.

The various government authorities which provide services to the people will be directed to publish a citizens' charter detailing the services they offer, the quality of services to be provided, as well as timelines of delivery.

Penalties ranging from Rs 250 to Rs.50,000 a day will be imposed on officials who fail to deliver services in time.

It mandates the establishment, both at the Centre and in the states, of public grievance redress commissions that will be permitted to refer a case for investigation to the Lokpal wherever there is evidence of corruption.

Gandhi's clamour for the bills ahead of the 2014 Lok Sabha elections had drawn flak from the Bharatiya Janata Party (BJP), which said the Congress vice-president was a late entrant to the anti-corruption bandwagon and his efforts were not genuine.

Before the extended Winter Session started on February 5, Sushma Swaraj, leader of opposition in the Lok Sabha, had said the bills appeared to be Gandhi's poll agenda and Parliament was not bound to follow his wishes.

The Congress, however, has accused the BJP of blocking the bills in Parliament.