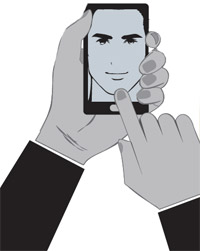 14 January, 2015
Print this article Font size -16+
Like it or not, the selfie craze is here to stay.  We have had innumerable marketing campaigns around selfies — from Century Ply’s ‘Felfie’ to the more recent ‘Woolfie’ from Raymond.  So apps around selfies too, continue to do well.
Shots, a selfie-only app, in which pop star Justin Bieber has invested, has already hit 2 million users. Significantly, 75 per cent of them are women between the age of 18 and 24.  This selfie app, available on iOS and Android, doesn’t allow you to post regular photos from your phone but only accepts ones from the front-facing camera lens. It does not allow comments either — so far, though you can post ‘Reply Shots’.
But while the still-photo oriented Shots is fun, it’s the video selfies that allow more options for chit chat that are suddenly all the rage. On Selfie.com,  an iphone app that is a cross between Vine, Instagram and Tumblr, you post 24 second video self expressions and have conversations with other users. Your video selfies can be viewed by other users who could respond with a video of their own or simply like it.
There are no filters or friend counts.  You can find your friends by linking this app to Facebook or Twitter or your iPhone contact book.  There are options to send private selfies to people – much like the direct message of Twitter – or post publicly. You can tag friends too.
Online, everything is moving to video, so why not selfies? The video epoch is here.

Instagram, A Bigger Hit
Facebook owned Instagram has just overtaken Twitter in number of monthly active users. The photo sharing site claims to have 300 million monthly active users compared to Twitter’s 284 million. Instagram users apparently share 70 million photos a day.
But the key statistic for marketers is that Instagram is ahead of Twitter in terms of brand engagement. Socialbakers compared top 25 brands on Instagram with top 25 on Twitter and has reported that per post engagement rates are nearly 50 times higher on Instagram.
Social Ad Spend
Social media advertising revenue is pegged to grow by 194 per cent in the US and touch $15 billion by 2018, according to data compiled by Invesp. While North America will commander bulk of social media spends (42.3 per cent) in 2014, Asia Pacific share is 29.2 per cent.  The rate for social ads on Facebook has risen by 54 per cent over the last year. In comparison, rates for cost per click search ads rose by just 8 per cent.
Raising Money
According to statistics portal Statista, between 1 July 2013 and 30 June 2014, Wikipedia received $52.5 million in donations and contributions, up from just $15 million in 2010.
(This story was published in BW | Businessworld Issue Dated 12-01-2015)
Tags assigned to this article:
magazine wikipedia instagram statista selfie magazine 12 january 2015