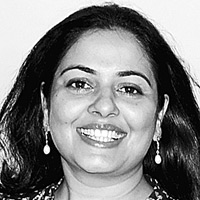 08 November, 2014
Print this article Font size -16+
The flirtatious flight attendants were grounded years ago and the stereotypical ‘Hawkins’ housewife ads put out with the trash, but women in many ads are still portrayed as trashy, making the provocative Fair & Lovely spots seem downright progressive.

A recent Amrutanjan campaign depicts a full-bodied apsara applying balm to a stranger whose moaning ecstasy knows no bounds. Brand management argues that Amrutanjan saw a 25 per cent growth in six months, proving sex sells. Besides, if Zandu can sizzle the market with Malaika’s item number, so can they.

Why only India? A Superbowl 2012 ad from Teleflora claimed that men who give flowers get laid. Calling foul, Ad Age said it was as “subtle as a bag of hammers”. After Dove’s 2004 global “Campaign for Real Beauty”and Nike’s 2005 “My butt is big and that’s just fine”, why go backwards? Why can’t we maintain the fine line between reality and fantasy? Between understated sensuality and in-your-face primetime titillation?

What is the mindset that enables men to cast themselves in an expert, patriarch or demonstrator’s role, yet cast women as air-headed customers, needing convincing before buying toilet cleaners, that too by using pseudo-scientific terms and voice-over repetition should they have missed it, poor things? Or is it just convenient for advertisers to portray women as socially desired or perceived (by men, I’d imagine), seldom questioning the fairness or reality of it?

Ads with women can be placed in three buckets: one, incompetent housewives; two, not involved in major decisions; three, decorative, leisurely or sex objects. Her usefulness is somewhere between a superwoman caretaker and a sex plaything. Anything that doesn’t fit comes from an agency that doesn’t yet exist. From household drudge to sexy office lady, reality never makes an appearance. Heck, even those Dove ads I praised earlier, were airbrushed for ‘real’ beauty! Sadly, most women internalise these stereotypes and learn their “limitations” thus establishing a self-fulfilling prophecy.

Offro deodorant ads, with women rushing to the nearest sprayed male, add to the insult. May well be a funny, but it is clear who is being laughed at. So when Shaina, our ‘humourless femanzi’, poses uncomfortable questions, she echoes a larger sentiment — are we abusing our limits of ‘tolerance’ and, in questioning a lopsided ad, are women still allowed to be a part of this progressive/liberal India without being told to “chill yaar”?

Since the case touches upon cars, take Volvo, for instance. Volvo equals safety and ‘Volvo moms’ famously agreed for years. Why does their brand logo have the male gender symbol? Agency claims it’s a symbol also used for Mars (men are from?) and Iron. Here’s a thought: try the female gender symbol, which stands for Venus and Copper. It represents balance, grace and aesthetics besides making a 21st century statement.

People argue that the solution lies within social or political evolution, and not a change in media consumption. But this assumes that media is just another commodity, feeding basal instincts. That is untrue. For, does it not facilitate democratic exchanges, powerful images, meaningful conversations thereby creating culture? And if producers and consumers of media (men included) don’t do anything about it, they are complicit in it. Shaina is not over-reacting, she’s just outnumbered. The ad industry is notoriously male dominant; barely 3 per cent women make it to the top creative echelons. Never mind women’s rights, it’s just bad business practice. We need to hire more Shainas; not threaten to fire the handful we have. Else, who will argue with Volvo?

The author was brand director, Hewlett-Packard, EMEA, at Publicis London. Now based in Chicago, USA, she is guest faculty at ICSC European Retail School, and an examiner at the Chartered Institute of Marketing (CIM), UK