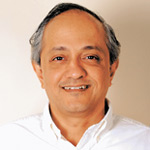 This case in not about social networking and Twitter. It is about the fundamental issues involved in building an ever-changing brand (elegant living and lifestyle through clothing and accessories) in this era of new media choices — addressing issues such as the brand's DNA, positioning, quotient of modernity and approach to proactive customer-centricity — and dealing with the dictates of cyberspace is the inevitable path to building a strong brand.

Kailash was dismayed that E-sqd never sold online, but Lopa remains in denial, and later equates the internet with social networking sites. The E-sqd team gets into a ‘To Twitter or not to Twitter' debate, losing sight of Kailash's real point.

Prima facie, the discussion seems anti-Twitter and anti-Net. But as they grapple with this new beast from the digital era, they realise the beast cannot be wished away. During the debate, their stances change.

Lopa sticks to her view that the universe of online consumers is too small to be bothered with. But her last comment is: "I would have started a dialogue with those moms…". CEO Dwij Nanda starts off rubbishing the online world but asks searching questions. Nayana firmly believes in large-sample based market research and is against attaching any significance to what a few thousand bloggers or Twitter folk say. And yet she uses the Tharoor example. Sankalp, unsure of his arguments, starts off seeing the point but soon begins to focus on the cons, without even addressing the pros of social media.

Unsurprisingly, Reshaad, the youngest of the team, based on personal experience, tries hard to get them to see the big opportunity that social networking creates. He is pushing the group to pay heed to the new world of bloggers and tweeters whom he likens to a group that may be small but holds the mike and is, therefore, listened to by many others.

As Kailash says, online presence is not just about sales. Staying open, available and visible to the consumer, ensures that more about your brand gets perceived. The brand needs to be known globally, and needs to follow the global Indian customer, wherever he goes.

Cyberspace and its role may be new, but the basic principles guiding human and consumer behaviour remain the same. Forward thinking and imaginative brands have addressed such questions, even before the advent of social networking sites, by being clear about what the brand stands for. In fact, the iconic status of brands is a direct manifestation of their consistent adherence to well-chiselled truths and consumer realities.

Just as in real life, so also in marketing, no consumer messes around with clear-headed, communicative and confident brands.

The internet may be omnipresent, but it will always be your real target audience that will consistently respond based on experience. Very few people have original views on Facebook or Twitter. But often, the lead view is based on experience. While this happens everywhere, on social media it gets captured real fast and all in one place. And here lies the opportunity for brands to proactively seed positive stories and brand strengths.

The analogy of throwing your brand to the mob as it were, happens when the brand communication programme is reactive and, hence, out of control. Not otherwise.

So it is not true that pre-teens and teens are the only ones on these sites. Equally, it is important to appreciate that in an era of co-creation and conversations, what the early-adopter young ones say holds sway over the rest. Therefore, there is no basis to ignore them or rubbish them as gossip-mongers.

Two learnings from behavioural economics as enunciated by brand guru Rory Sutherland are worth noting. One, the power of now, whereby we tend to respond to stimulus in proportion to its immediacy and not its strength. Two, the power of channel preference. For example, while young people typically do not give much to charity, if you allow them to give via text messaging they can become quite generous.

Finally, when you are in the game, you have to get comfortable with handling negative feedback too. For one, it pushes you into introspection, which is good for staying on track. Two, it allows you to re-articulate your brand promise more effectively. Brands must emulate good teachers who answer every question, with wisdom, tact and maturity.