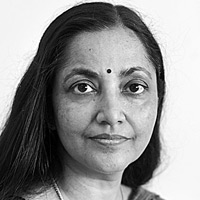 08 November, 2014
Print this article Font size -16+
It is human nature to defer making those decisions that are either unpleasant or difficult. If the task cannot be deferred, then we want to put the responsibility on an external factor. People always look for such opportunities, and consultants and trainers present just such an opportunity.
Those who have been managing their team members for long prefer that someone else takes the decision on them so that they can say ‘I didn’t say this; the consultant did’.
But is it really possible for a trainer or consultant to give an opinion on someone whom she has seen for just a few days, under a controlled environment? All trainings are held in a contrived, safe environment. The omissions and commissions during training do not impact real life. During a training, it is not unexpected to see participants act in a manner that is far from their normal selves.
Some participants become extra generous (something they are not in their usual work environment). They think ‘It’s just a game! Nothing to lose. And, more importantly, the trainer is watching’!
Some are indifferent. ‘It’s just a game. Why bother?’
While how a participant responds to a given stimuli during the training can be recorded and reported, can an assessment of his overall personality and his capability as an employee be made by the trainer? And would such an opinion be right? No. It would be half-baked at best.
In the case study, Tripti Vasudev should have expressed her views clearly to the client organisation. She should have let them know that giving her opinion would not only be incorrect but the manager — in this case Apurva Jain — would also lose credibility, as the teams reported to him and expected a fair review from him.
If the manager gets dependent on the opinion of an outside agency, what is his worth and credibility?
Such requests from client organisations actually benefit no one. The trainer is also put in an uncomfortable spot, where her ability to be an impartial spectator during the team exercises gets unduly coloured. Therefore, Tripti is rightly self-conscious with Team B — she finds herself watching Suyash Rajan more. She finds herself evaluating the candidate instead of simply observing him.
This raises the question: Who should play a significant role to make these expectations clear and reduce the dilemmas in the process of people management and development?
In my opinion, it is the responsibility of HR’s Rao to interpret the role of training in the correct perspective.
The role of HR is diverse: managing hard as well as soft data and dimensions. People in such roles are technically equipped to do it. Yet, the amount of emotional intelligence required to deal with various challenges is almost always underestimated. There is a saying to the effect: You can help people develop only to the level you have developed yourself.
Only those in HR functions who realise that the role of training is to impart knowledge and skill and influence attitude can help in adding true value. It is not an evaluation tool for promotion, retrenchment or any other organisational imperatives (unless an initiative is particularly designed for that purpose).
Let us now look at Apurva. How does he interact with his subordinates? How does he deal with Suyash’s intransigence? Has he spoken to Suyash and asked him why he behaves that way and counselled him? Has he let him know how his behaviour negatively impacts him and others? Has Apurva pointed out the ‘de-railers’ to Suyash? If no, then perhaps that is what needs to be done.
As far as Suyash is concerned, he needs an initiation into reality. Such people are generally self-absorbed, live in their own little wonderland and are not able to tune their senses to outside stimuli. So caught up are they in themselves! They need to be shown a mirror. Sometimes few strokes of a verbal-hammer are needed to drive in sense.
Either his boss or HR can do that. In most cases, it helps.
The author is an HR consultant with Prabudh consulting. She has expertise in setting uo HR systems & processes, talent management and specific interventions
(This story was published in BW | Businessworld Issue Dated 17-06-2013)
Tags assigned to this article:
magazine case study analysis hr magazine 17 june 2013 sniggdha jauhari