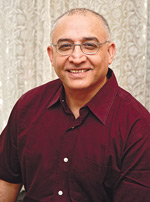 Internet is a space where a wide range of things can be done. Apart from the conventional use of the space for selling, one cannot but be amazed at the way cyberworld can be used to state and generate opinions.

This is something that Reshaad, the youngest E-sqd team member, is alluding to when he says, "On the Net, you have a million people dying to be heard, to be seen, to express, to shout". Facebook and Twitter, among others, are the spaces that are the containers for the thousand indeed millions of voices that have suddenly been given a platform for expression. No more are you shouting into a void, but into one or many receivers who respond and include many others as well, much like the concentric waves that form when you throw a pebble into a pond.

Some of the social platforms created on the Net seem to cater to a basic need that people have: connecting with others. When you delve a little deeper into the form of that connecting, you notice that people search primarily for those similar to themselves. Resonance happens. You hear the proverbial splash when the pebble is dropped in the well. You can say the tiniest thing and there is a response, something that the non-Net world just doesn't provide. The circle expands phenomenally. Not only can you relate across a huge spectrum of people, you can express yourself far more freely.

The notion of crowd has been redefined in a major way. No more is it about physical assembly or presence of a large number of people. Internet has spawned the possibility of large-scale collective behaviour on a platform other than physical presence. An initiating behaviour can become the basis for a large number of views binding together, much like the Mexican wave at a football match. The difference with the actual presence of people is that the medium is the written word as against physical proximity and intense emotion. Writing itself transforms the emotion, instilling a certain formality on the process. There is some thought that goes into each response.

So how does all this apply to E-sqd? Lopa and her boss Dwij Nanda look at the issue of catering to an online audience in a way that sees the Net only in terms of whether it can be used as an effective platform to sell. Lopa says it is not worthwhile to invest in an online sales module. Nanda refers to the three-dimensionality of the actual experience as opposed to the two-dimensionality of online shopping. Nanda does see how the opinions become "foaming froth", but his view is that it is not worthwhile to engage with this kind of thing.

If you look closely at the instance of Motrin referred to, you will see that the starting point, before the build up, was that the manner of writing about mothers was disparaging. It seemed like a legitimate enough reason to voice the unhappiness. When this kind of thing escalates, there is a pressure on those who (intentionally or otherwise) may have chosen their words poorly. One needs to distinguish those triggers that have substance from those that are purely rabble-rousing without a basis in fact. All collective behaviour cannot be dismissed as ‘froth'. Consumers want to express themselves and especially to other likeminded people.  They communicate experiences with each other, which was earlier so limited.

The reference to the poll on whether Shashi Tharoor's use of ‘cattle class' was offensive is very intriguing. My suspicion is that if the people who are being referred to were in fact internet savvy, their reaction may have been strongly negative (similar to the mothers who were offended by the Motrin advertisement). The fact is that in India, internet is only for the privileged. In countries where the penetration is far deeper, more people share their upsets. among other things.

The lesson for me is that one cannot simply dismiss all that snowballs on the internet as unworthy of attention. There are several issues that have shown how effective this process of seeding an idea and its support is to redress or draw the attention of people to what is wrong. Some examples include support for H.S. Sabharwal, a professor at Madhav College, who was killed by political hooligans in Ujjain or the protest against the way that women at a pub in Mangalore were beaten by self-proclaimed upholders of the perceived collective social code.

It is clearly a new world that is in the process of taking a shape. Suddenly, the connected laptop in front of you is like a large group of people who can validate or question or extend your thinking. There are both negative and positive forces at work. One must be open enough to receive both and yet know the difference.

Those at E-sqd must realise that it is not about having separate managers for Twitter or Facebook, but about being collectively aware of what is transpiring as well as using the internet with responsible purpose.