Analysis: An Island Of Inclusion 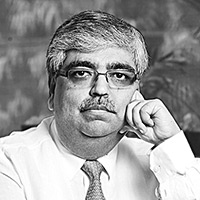 08 November, 2014
Print this article Font size -16+
As Kalpana’s story moves on, we establish without doubt that her bank is a discriminating organisation. My criticism of the individual players was explicit in my previous analysis. Let me focus on the larger issues this time.

How can organisations that form a part of discriminatory societies be aloof from the reality around them? Our society is a violent and an unequal one — women are killed before they are born, women are more likely to be malnourished, women drop out from school more often than men, women are sold for sex, organs and labour, and women from middle-class families report domestic violence and sexual abuse to the extent of 50 per cent of the population. Can then Kalpana expect her organisation to be any different than her society?

Can one create a value-enhanced diverse oasis? An organisation that is equitable and respects and includes all people in the larger desert of discrimination and exclusion, is a rarity.

We also live in a society where very early on in his life, the male child recognises that he is the protector. The women in India have recognised that they have the right to be equal. They have also recognised that this right will be infringed upon more often than not and they will have to fight for it. Given the ongoing vulnerabilities of violence, and of being dismissed and spurned, women have learned that to survive in male bastions, they have to be like men. The culture of silence pervades and institutionalises the discrimination and violation of women. This happens to the extent that Sundari as a woman does not recognise that to please the male determined cultural norms she has become discriminatory herself.

In such a stark socio-cultural reality, there is an expectation that the organisations will be able to create a world of equality. Is that possible? Is it even attempted? Is Corporate India gender friendly? Or are the women still invisible and silenced in the boardrooms? There is unfortunately limited research or evidence on the issue.  The organisational effort for ensuring gender equity is not documented. The best practices are not highlighted. The human resource policy does not have measurable indicators or audit processes. This heightens the risk of organisations living under the illusion that they are ‘gender friendly’ while the discrimination continues right from recruitment to leadership succession.

This affects the culture of the organisation, its productivity and its ability to retain the best people for the job. It is also a reflection of institutionalisation and normalisation of such discrimination in the larger society.

Some will have you believe that it has already been achieved and no gender-based discrimination exists in India Inc. Such is the level of collective denial that one has to question the intent that allows the delusion to prevail. The Bank in the said case is definitely suffering from the delusion that it respects diversity! I hope this challenges it to question itself and its team members.

Given the lack of evidence on the gender dimension in corporate India, there is need to provide tools and methods to managers in the Indian context so as to enable them to be champions of engendered and diverse processes. There is a need to build capacity among managers to identify discriminatory events or processes. There is need to develop methods to measure the impact of gender equity and also the impact of gender discrimination on the organisation and the individual manager. There is a need to develop and reward best practices that can be rolled out to the larger corporate world. The idea of gender equity has been accepted to some extent there is a need to make it behavioural and measurable.

In the meanwhile, one can only hope that Kalpana finds the courage to continue to challenge those around her to treat her as an equal. The battle does not end even if you change the organisation. The characters change, rules, unfortunately, do not!

The author is Senior Consultant Psychiatrist and Psychotherapist, Apollo Hospitals, New Delhi; and chairperson of an NGO named Saarthak