An Interesting Passage To India 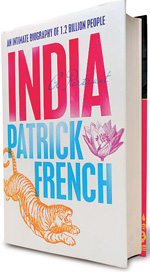 French recounts the development of enterprise despite the many frustrations. The lawyer, T.V.S. Iyengar, started making bus parts and diversified into making car parts and then, logically, the two-wheeler. To get an imported prototype, he had to export a certain amount to unknown markets, which was ridiculous as he could not produce the product without the imported part! Finally, he had to set up an office in Delhi for lobbying. Another interesting story is of Sunil Mittal's evolution from dealing with import of generators to VCRs, push-button phones to the Airtel empire. At a different level, C.K. Ranganathan showed amazing enterprise to make the famous Chik shampoo sachet. The author lauds the imprint of Indian industry in the global arena, with the final frontier being foreign acquisitions. Major innovations are seen in Cadbury's adaptation to the Indian mithai concept or Rajeev Samant's tryst with making wines from wasteland.

This was a new India, which arrived with entrepreneurs moving into the ‘no-strings generation' where economic reforms unleashed opportunities. The author, however, misses the point that economic reforms may not have been an Indian brain wave, but a compulsion on account of the International Monetary Fund loan.

French's description of the other side of India Inc. is lined with subtle humour — when talking of the symbiotic relation of Swaraj Paul and John Major or his obsequiousness with Indira Gandhi. His description of Mukesh Ambani's 27-storeyed building or Mrs Lakshmi Mittal's ‘movable assets on ears, neck and fingers' does provoke a smile. He smartly juxtaposes this with the cases of philanthropy exercised by corporates.
French discusses the caste system and how there is a reversal with the ascendancy of people such as Mayawati. Indian society has also become progressive where gay rights are accepted and more women are working, but he cannot digest the concept of servants who "move around without assurance, and the expectation is that they will always be there to facilitate a certain way of life". Quite hard hitting really, when we look at our own homes. Finally on Hinduism, he says that it can be understood only by seeing how it is lived. How true!

Author's Details:
Patrick French is a British writer and historian. He is the author of Younghusband: The Last Great Imperial Adventurer, Liberty Or Death: India's Journey To Independence And Division, Tibet, Tibet: A Personal History Of A Lost Land and The World Is What It Is: The Authorized Biography of V.S. Naipaul. French studied at the University of Edinburgh.Sabnavis is chief economist at CARE Ratings