An Idiot’s Guide To Drinking Coffee 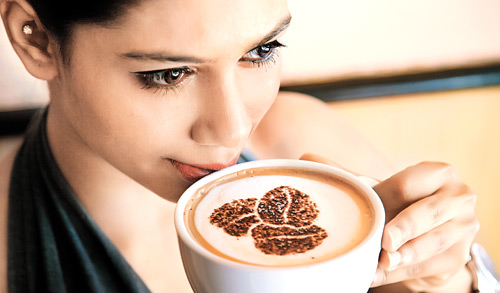 Americano: In this one, you pour hot water on a shot of espresso. According to coffee gourmets, if you pour espresso in a glass of hot water instead, you get a similar coffee, but you call it "Long Black". Adding water to the espresso shot gives a coffee that is similar in strength (caffeine-wise) to the American drip coffee, but it tastes quite different. As the name suggests, this one was probably
invented to suit American tastes.

Cafe Mocha: What is generally agreed by most people is that the mocha is a coffee with a chocolate flavour and an espresso base. Beyond that though, there are plenty of variations. In some, the mocha is made by creating a drink similar to a latte first, and then sprinkling fine cocoa powder on top. In others, you make a cappuccino first, and then sprinkle cocoa powder on top of the milk foam. In still other places, you could add other flavours — cinnamon, hazelnut along with your cocoa powder.

Irish coffee: This is actually a coffee cocktail and not a coffee per se. One common recipe is mixing a normal hot black coffee with a shot of whiskey (ideally Irish whiskey), and stirring it with brown sugar. And then serving it with a thick topping of cream.

However, there are dozens of variations of Irish coffee and the recipe largely depends on which bar or coffee shop you are patronising. In some, Irish whiskey is dispensed altogether and substituted with scotch or bourbon. In others, the base varies. Some people use the espresso as the base while others stick to regular drip coffee. Even the cream topping is a subject of many arguments. Purists hold that the original recipe stipulated cream that was not whipped. But most bars have no problems serving whipped cream in their Irish coffee.

Once you have sampled the more conventional coffee drinks mentioned above in your coffee shop, you could try out the hundreds of other variations — from the Latte Macchiato to British Islander to the Caramel Macchiato. Discuss it with your Barista — and don't stick to just the same old safe choices...